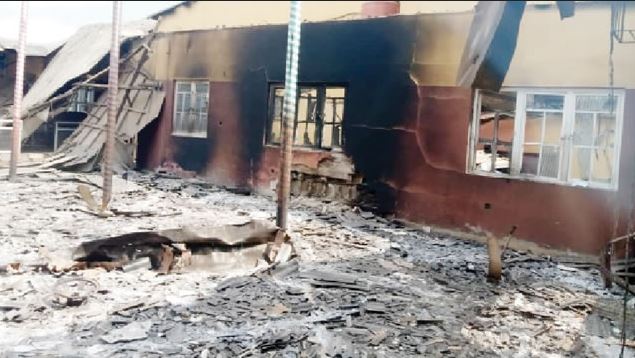 Solomon Ajao, a cleric in the Fagba area of Lagos, has told of how he suffered a terrible misfotune in the hands of hoodlums.

According to Sunday PUNCH, the pastor recounted the devastating loss a clash among youths in the community left on his family.

His church and apartments within the premises were burnt down in the clash and his family displaced.

Sunday PUNCH learnt that some youths, claiming to be staging #EndSARS protest mounted a roadblock at the Fagba junction on Wednesday and stopped a truck conveying cows from the northern part of the country.

The hoodlums reportedly set fire to the truck when they demanded a cow from the owners who turned down their request.

The owners reportedly mobilised and launched a reprisal, leading to burning of properties, including houses, church, shops, a bank and a filling station.

Many people were allegedly feared dead in the clash that lingered till Thursday but there was no confirmation by the police.

Narrating how the incident affected his family to our correspondent on Saturday, Ajao said the violence started on Monday when he left home for a prayer ground in Ifo, Ogun State.

He said, “I went for a prayer at Ifo early Monday, leaving my wife and children at home. I was at the prayer ground around 8am when I got a call that Fagba was boiling. Some of my church members relocated my family to their house because our church was at the centre of the violent spot.

“They broke into my premises through the gate and burnt down the church and our home, including a car I bought recently. I just returned from the prayer ground today (Saturday) and saw that everything was gone. My family and I have been displaced.”

The pastor said the attack on his property was premeditated, adding that the arsonists only exploited the clash to execute their plan.

A resident, Ibrahim Adeniyi, said many yet-to-be identified people were killed in the mayhem. He, however, said normalcy had returned as people had started going out.

A video clip sighted by our correspondent showed some thugs breaking shops in broad daylight. Some of the looters ran away with stolen items as residents and bystanders watched in dismay.

“They are breaking shops at Fagba. These are not #EndSARS protesters. See them; they are hoodlums,” someone, who was filming the scene, said in the background.

Meanwhile, the police spokesperson in the state, SP Muyiwa Ademola, in a statement on Friday said the Commissioner of Police, Hakeem Odumosu, visited the community and appealed to the warring groups to sheathe their swords and live together peacefully.

The statement read in part, “The police chief, who was accompanied by the Area Commander, Area G, ACP Ibrahim Zungura, Commander PMF 2, Lagos, ACP Waheed Ayilara, CSP Mohammed Odunlami and some other officers, also visited Fagba area of Lagos where some Hausa and Yoruba youths engaged in attacks resulting in the destruction of property as a result of a minor conflict which has been settled amicably to forestall any further attacks in the area

“The Commissioner of Police immediately ordered investigation into most of the cases across the state including the incidents at the palace of the Oba of Lagos and Fagba respectively.”

digestng - November 24, 2020 0
Actress Lilian Afegbai and mother   The Edo State Judicial Panel of Inquiry has ordered the mother of a Nigerian actress to appear before it.   Actress...

digestng - November 24, 2020 0
Oba of Benin and wife, welcome baby girl   Queen Owamagbe, one of the wives of Oba of Benin, Oba Ewuare II has given birth...