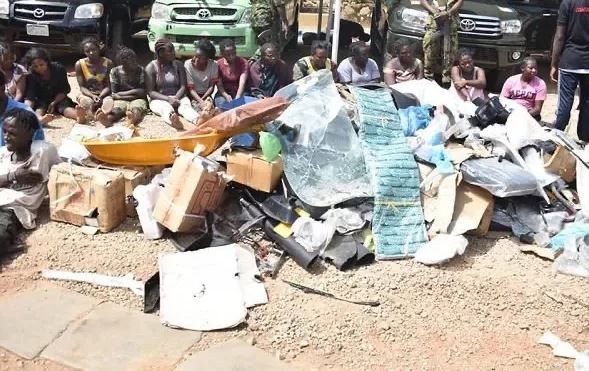 Thirty suspects have been arrested by The Special Military Task Force, for vandalising and looting valuables at the Jos residence of Mr Yakubu Dogara, a former Speaker of the House of Representatives.

The Commander of the task force, Maj.Gen. Chukwuemeka Okonkwo, presented the suspects to newsmen on Sunday in Jos.

Okonkwo, who described the act as criminal, said the suspects violated the 24-hour curfew imposed on some parts of the state by the government.

He said the suspected criminals who invaded the house of the lawmaker on Sunday were arrested by personnel of the task force.

“These suspects,  13 males and 17 females were arrested today while  vandalising the house of the former Speaker House of Representatives, Yakuba Dogara, at Lamingo, Jos.

“This is purely an act of criminality; vandalising and looting government property and that of private individuals is criminal.

“So, we can not sit down and watch miscreants looting public and private properties in the state,” he said.

The commander said the suspects would be handed over to the appropriate authority for prosecution.

News Agency of Nigeria (NAN) reports that items recovered from the suspects include: eight grinding machines, two unassembled tricycles, one tricycle engine and one bale of clothing materials.

NAN also reports that the task force had earlier arrested 123 suspects for vandalising and looting items from private businesses and government properties within Jos.

Lekki Shooting: ‘I Hope I’m Not Going to Die’