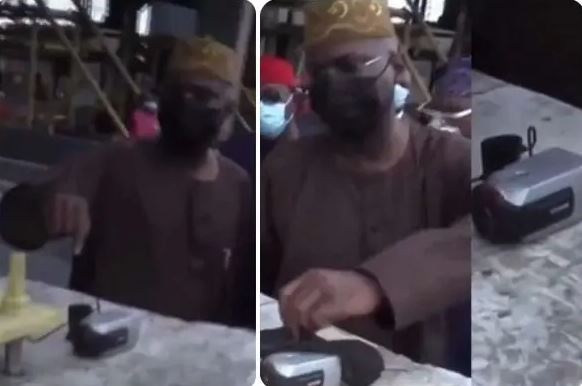 According to the Lagos state judicial panel on police brutality, Minister for Works and Housing, Mr Babatunde Fashola during yesterday’s inspection of the premises tampered with the evidence at the Tollgate.

Fashola found the device while on tour of the place where #EndSARS protesters demonstrated for 13 days before they were forcefully dispersed.

On Tuesday, men in army uniform invaded the Lekki toll gate where the unarmed protesters were and opened fire on them.

There has been a controversy over the number of those killed and the persons who sustained injuries.

Reacting to the development, a member of the Lagos judicial panel on police brutality, Ebunolu Adegboruwa, described the inspection as “illegal tampering with evidence”.

“Since the Panel has been vested with jurisdiction over the Lekki Toll Plaza, I verily believe that it is illegal for anyone else to conduct any visit to the said Lekki Toll Plaza in the absence of and without the authority and consent of the Panel.”

He added that the Lagos judicial panel will treat the delegation’s inspection of the site as contempt, and that the panel will summon individuals it perceives to have obstructed justice.

Horror! Huge Fire Erupts On A Chinese Highway As More Than...

How SARS Operatives Killed My Brother, Stole His N532,000