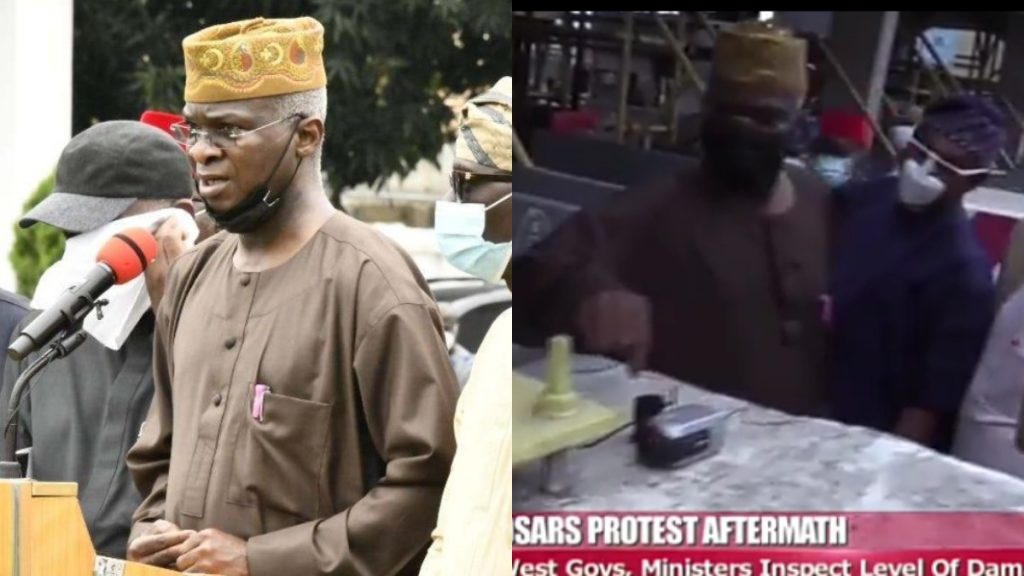 Nigerians have tackled the Minister of works and housing, Babatunde Fashola over reports that he discovered secret camera at the scene of the shooting in the Lekki area of Lagos state.

The reactions are quite hilarious and some serious.

Fashola who is also a former governor of Lagos State reportedly found the device while on tour of the place where #EndSARS protesters demonstrated for 13 days before they were forcefully dispersed.

On Tuesday, men in army uniform invaded the Lekki toll gate where the unarmed protesters were and opened fire on them.

There has been a controversy over the number of those killed and the persons who sustained injuries.

The minister reportedly picked up the device with a handkerchief and handed it over to Babajide Sanwo-Olu, governor of Lagos.

However, many Nigerians are of the opinion that the camera must have been planted there to change the narrative of what actually happened at the scene.

Some social media users gave the former governor a new title of ‘Inspector’, Sheer and detective among others.

Check some social media reactions below:

•Arise TV reporters were there

•LAWMA has done a clean up

•Private volunteers have gone to clean

NOBODY found a camera.

Until Fashola came from Abuja.

I wonder when Fashola became a Crime Scene Investigator (CSI) from lawyer.

In their myopic and abacus mind, they assumed Fashola’s old glory could earn him trust and make him the perfect specimen for their experimentation.

Inspector Sherlock Fashola. It’s your hand on the chest for me, sir. pic.twitter.com/qQAYxjvVOo

His name is Babatunde ‘Sherlock Holmes’ Fashola. The only Nigerian man with the Third Eye. pic.twitter.com/6fperyAucN

When Peruzzi said: “Call Fashola” we thought it was just a song

I love Fashola ooo.. next time, daddy should look at the script very well before he acts. That’s a terrible acting. So no one saw that camera for days, not even lawma. Omo, they no rate us true true

Since Agent Fashola Reddington discovered the mysterious CCTV camera at Lekki Toll Gate, he should be deployed to Sambisa to uncover the perpetrators. A National Hero!🙌

How Lekki Toll Gate CCTV changed to camcorder, Fashola himself will explain. #EndSARS

If care is not taken, this government will kick nollywood out of business. What a great actor! Jack Fashola Bauer. FBI agent. The CEO of special discovery

Fashola was even using cloth to pick the camera not to contaminate the evidence. And na person papa be this😂💔 pic.twitter.com/pdTWrMf9AO

Some Of The Abducted Zamfara Schoolgirls Were Made To Trek By...

Man Dies After Watching Football Match With Girlfriend In Lagos