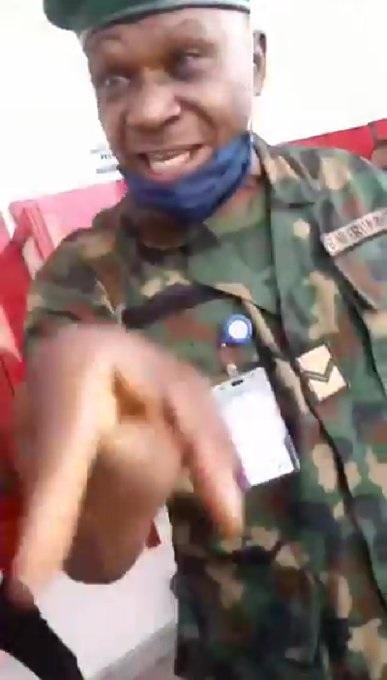 The soldier who flogged a woman at an ATM stand

A Nigerian soldier has been caught on tape physically assaulting a woman identified as Ada-Oma at an ATM stand.

It was gathered that the woman had only asked him to join the queue before the assault began.

According to the Ada-oma, the military man ignored the orderly queue maintained with intentions to jump to the front of the line. Ada, however got in trouble by asking if he was on the queue.

Taking to Twitter, she wrote, “Hello Nigerians, I was just assaulted by an army official this morning 26/10/2020 at the ATM stand of @UBAGroup at their oshodi branch. i’m still shaking and crying as i write this because i have never felt this way in my entire life.

“I’m also scared writing this because he Threatened me. so my Life is your hands Nigerians.

“This happened at your branch in oshodi and your security men were there. He hit me!!!!! I literally cried my way to the office. I never insulted him.

Watch the videos below …

Shock As Pastor Gets Arrested For Allegedly Sodomizing Six Schoolchildren