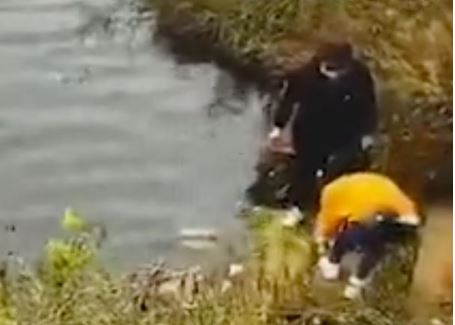 The woman was pushed to her death by her friend

A footage has shown the sad moment a woman pushed her friend to death as she bent down to tie her shoelace.

A woman pushed her friend into a reservoir before both of them drowned in a disturbing incident captured on CCTV.

All the details were exposed by a CCTV footage recorded in China.

It shows two women standing near the edge of the water in the city of Nanjing when one of the women bends down to tie her shoelace.

The woman in orange who had bent to tie her shoelace can be seen struggling as the woman in black holds her down.

Police confirmed that the pair drowned in the bizarre incident in the eastern Chinese state of Jiangsu, Yahoo News reports.

Oh No!! Woman’s Heart Explodes After Having Cosmetic Treatment For Stretch...