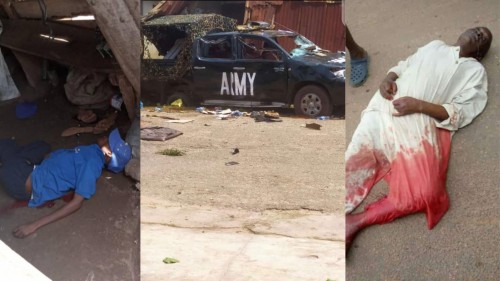 Two people were reportedly shot dead by soldiers in Osun

Some youths calling for the removal of the Akire of Ikire, Oba Olatunde Falabi (Lambeloye III) have been reportedly shot dead.

It was gathered that the youths had stormed the palace and drove the monarch out of the place.

Sahara Reporters reported that two persons were allegedly killed by operatives of the Nigerian Army in Ikire, the headquarters of Irewole Local Government Area of Osun State while trying to disperse the youths.

The protesters were relying on the Supreme Court judgment of 2014 that it was not the turn of the Falabi’s ruling house to produce the Akire and also a similar judgment by the state high court few months ago.

Efforts by men of the Nigerian Army to disperse the irate youth and bring normalcy to the town created more tension as they started shooting sporadically.

The youth in return started hurling stones at the soldiers and ambushed them after, which they snatched their rifles.

A resident of the area told SaharaReporters that failure of the youth to return the rifles made the soldiers to call for reinforcement in the process, which at least two residents of the town were killed.

Police Visits Home Of Oxlade’s Manager’s Mom Who Was Slapped By...

Funke Akindele Replies Online Prophet Who Said She Will Die If...

I Still Can’t Believe I Won