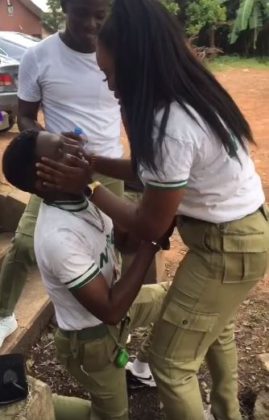 A member of the National Youth Service Corps has surprised his girlfriend by proposing to her during their Passing Out Parade.

The incident happened on Wednesday, October 29.

The corp member, identified as Balogun Babatunde Temidayo bent his knee and proposed to his girlfriend, Adejoke.

The dramatic proposal was filmed by their colleagues on the POP ground in Ibadan, Oyo state. 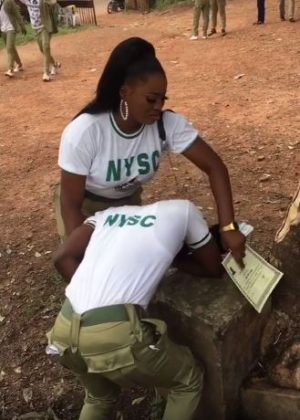 In the video, Balogun can be seen feigning sickness whilst clutching his stomach; at first his girlfriend thought he was joking.

He, however, switched it up and acted like it was getting worse, Adejoke grew worried and started screaming for water and telling their colleagues to stop filming.

A small crowd had already gathered to observe what was happening. The voila moment came when he brought out the ring and asked her to marry him.

I love you baby 🥰❤️Congratulations to us on our POP

and thanks for loving me unconditionally babe😭😭😫

President Buhari Should Speak To Us, We Didn’t Vote For Garba...