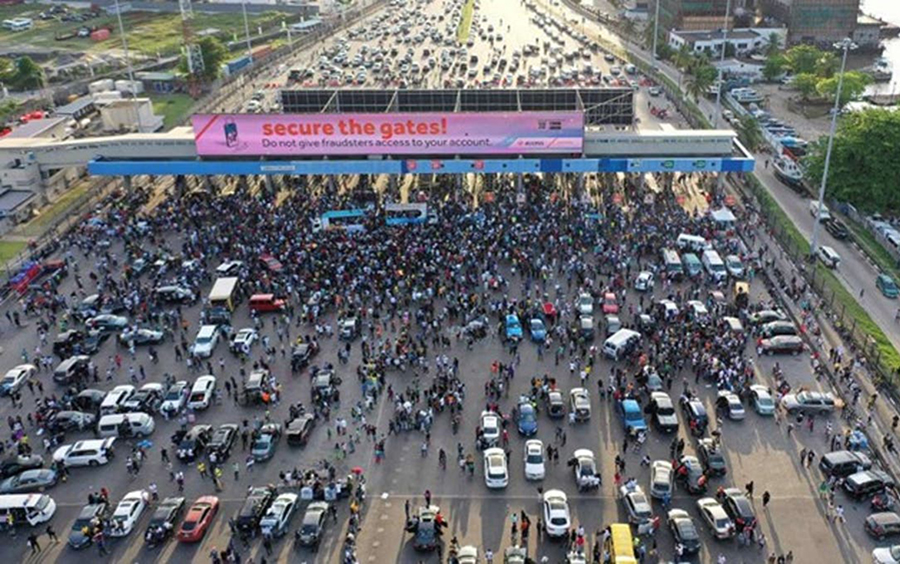 The protesters at lekki toll gate

On Monday, British lawmakers debated sanctioning Nigerian government officials involved in the attack on peaceful protesters at Lekki on October 20. The petition against the Nigerian government more than doubled the threshold of 100,000 signatures necessary for the lawmakers to attend to it, and they did speak to the issues. In their presentations, they explored how to punish those that played a direct role in committing the atrocities without hurting longsuffering Nigerians in the process. Several of them invoked the Magnitsky Act. None contested the possibility of applying it, which could mean Nigerian officials are about to be red-carded.

In summary, the Magnitsky Act is one of the legacies of the Barack Obama administration. The law allows the USA to punish people involved in human rights abuses in their own countries using measures such as asset freeze and an outright visa ban. The law was in retaliation against abuses suffered by a Russian lawyer and auditor, Sergei Magnitsky, who uncovered massive corruption of companies and individuals linked to the government in 2008. He died in jail in mysterious circumstances. In 2012, the USA made that law to check the power abuses by governments who lack respect for their nation’s judicial processes. That was why, in September, the USA could announce a visa ban on some unnamed individuals who were involved in election rigging and violence in Nigeria.

The United Kingdom too recently made the Magnitsky laws as part of their commitment to get powerful leaders of the world to commit to respectable behaviour. Just like the USA, the UK, acting under the Magnitsky law, can freeze assets and impose travel bans on people who abuse human rights in their individual countries. Between both the US and the UK, they can punish human rights violators by cutting them off the lifeblood of global financial systems. If they pinpoint the Nigerians involved in the sad events of October 20 and punish them under that law, those people might as well bear the Mark of Cain for the rest of their lives.

You can see why the Minister of Information and Culture, Lai Muhammed, is jittery. Like the proverbial man who swallowed a pestle, Muhammed can neither stand nor stoop. He and his paymasters are in trouble. If the US and the UK impose visa bans, what will become of these people next time the President, Major General Muhammadu Buhari (retd.), develops an ear infection and cannot find a hospital in the entire Nigeria to treat him? Some of these people have stolen from Nigeria and invested the money in real estate in the UK. They stand to lose a lot.

Compare the way Muhammed and his fellow apologists have been ranting against the CNN’s reporting of what happened at the Lekki tollgate with the way they have ignored a similar -and credible report -by a local online newspaper, Premium Times, on the same issue, and you realise that these people despise Nigeria and Nigerians. It is not surprising that Nigerian leaders can only be bothered to respond to oyinbo institutions. Their heads are firmly between their legs of the western government, and that is why they are all over the place, stomping their petulant feet on the dusty Nigeria earth. What can they do to either the CNN or the British lawmakers other than sending Lai Muhammed on the slave errand of making futile threats?

The good thing about the noise they are making is that they are also revealing themselves to be unravelling. Their propaganda is coming undone, and the truth of their government’s failures is stuff for global news headlines. These people got into office propagating falsehoods, and the truth is tearing its way through the tissue of lies they have placed over reality. Since 2015, they have had nothing substantial to display as their achievement. Not a single thing. Ask them, and they will start blaming abstract factors: global oil supply, global supply chains, pandemic, climate change, cultural factors, the war in Libya. They are never in control of any situation; every historical development from even the remote corners of the world sends them into a tailspin. They won the election in 2015 because they took advantage of the indignation against the then incumbent government that was clueless as it was mediocre. Now that the same tool is being used against them, their spokesperson, Lai Muhammed, is coming apart at the seams like a garment sown by an untrained tailor.

When you listen to the presentations by the British lawmakers and then compare them to the nonsense spouted in the Lagos House of Assembly when the latter too held a session on the aftermath of #EndSARS, you feel sorry for our people. The vast difference in the quality of thought that went into the two presentations tells us how little our leaders understand democracy. They are just there in those hollow chambers for the fat salaries. No, please, this is not the time to invoke the dubious sentiment of patriotic pride. This is not an occasion when we tell other countries to mind their business and let Nigerians solve the Nigerian problem. And before the Buhari supporters resort to their standard excuse of claiming the petition was sponsored by corrupt people who want to damage the image of their Dear Leader abroad, we will do well to remember that these issues played out similarly during the Goodluck Jonathan administration. Those now petitioning against the CNN applauded these western efforts at the time.

The reality is that our judicial system and democratic instruments have run the limits of their abilities to hold our leaders accountable. Just like our fathers did in the colonial era, we too have to appeal to the moral authority of western powers to adjudicate our issues. Otherwise, we will just kill one another off. We have been supposedly independent for 60 years, but we remain dependent on their systems for sustenance.  On Monday, those lawmakers questioned their government support of the Nigeria Police Force given the latter’s record of brutality. They mentioned how they have provided up to £10m worth of funding for SARS through training and equipment supply in the past five years and that their government cannot afford to support an organisation that abuses its own people. You listen to these people telling themselves they owe it to the rest of the world to be a force for moral good, and you cannot but feel ashamed that we cheaply offer ourselves as the testing site for them to establish their virtues. One of the lawmakers, Stephen Doughty, representing Cardiff South and Penarth, mentioned that he had received reports of recent extrajudicial killings allegedly carried out by the Nigerian Army in Oyigbo in Rivers State. Why did we have to take a case of abuse to the British lawmaker when we have courts in Nigeria?

Nigerian leaders keep disgracing the nation through their (in)action. That day when they turned their guns on protesters, they demonstrated both their lack of nuanced understanding of public sensibilities and their inability to view social issues through bigger prisms. Nigeria is not the only country where young people have protested. There is a global youth restlessness. Since last year, there have been anti-government protests in about 100 countries altogether. In places like Algeria and Hong Kong, the protests lasted a year and a year and a half respectively.

No thanks to the failure of our leaders to read the palms of history, we joined the ignominious list of those countries such as Iran, Iraq, and Nicaragua, that cracked down on the protesters with violence. When Buhari eventually came around to speaking about the protests, he said the speed with which they accepted to dismiss SARS was taken as a “weakness.” The moment he said that, I gave up. This man is still cocooned in the small world of the 1980s, where strength is manifested through brute abuses. He imagines the issues were a test of his will, and he could assert himself by firing at protesters.

But see where that got them?