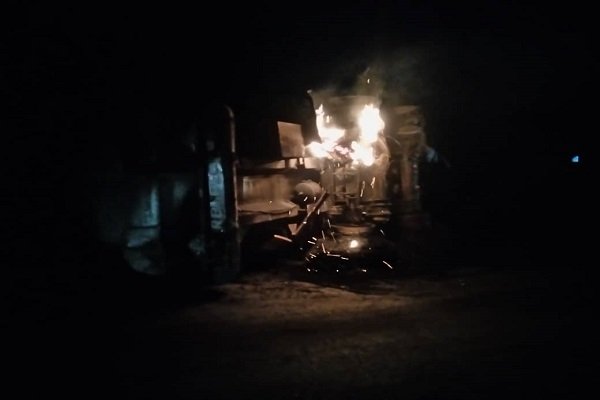 Lots of damage has been done in a community in Anambra state after a tanker explosion occurred.

According to The Nation, an electric transformer and shops were on Wednesday night razed in a fire explosion involving a diesel laden tanker in Agulu, Aniocha Local Government Area of Anambra state.

The tanker reportedly crashed near a petrol station when the driver suddenly lost control while descending a slope towards Nise/Amawbia road in the area.

An eye witness said the spillage from the ill-fated truck spread to the transformer and the nearby roadside shops which suddenly went up in flames as a result of the ignited fire.

He said the driver and his conductor who sustained minor injuries, as well as victims of the bus collision were rushed to the hospital for medical attention.

According to him: “On Wednesday night, a diesel laden tanker without a registration number crashed at Agulu town close to Owo filling station while descending towards Nise/Amawbia road.

“Combined team of FRSC and NPF who were on ground barricaded the crash scene to divert traffic while the men of the State Fire Service extinguished the inferno.”

While wishing the victims quick recovery, the FRSC boss admonished motorists to adhere strictly to traffic regulations and to abide by speed limits and lane discipline.

He also advised truck drivers to embark on regular maintenance of vehicles and to drive with absolute concentration, just as he urged them to observe at least 15 minutes rest after every four hours of drive to avoid fatigue.