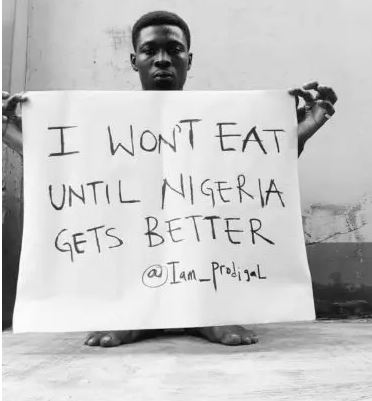 An aggrieved Nigerian man who is unhappy with the economy of the country took to social media to reveal he will be going on a hunger strike until Nigeria become better.

The young man while holding his placard, stated that he will never eat again until Nigeria gets better.

However, the man on the photo with his statement on the placard, was only identified with the Twitter username @Iam_Prodigal which has become a meme for social media users.

On the placard, it was boldly written, “I won’t eat until Nigeria gets better”.Meanwhile, many Nigerians on social media has reacted to the viral photo, as most people hillariously tell young man that he will wait forever for Nigeria to get better.

Photo Of 3 Men Who Abducted And Raped Makeup Artist After...