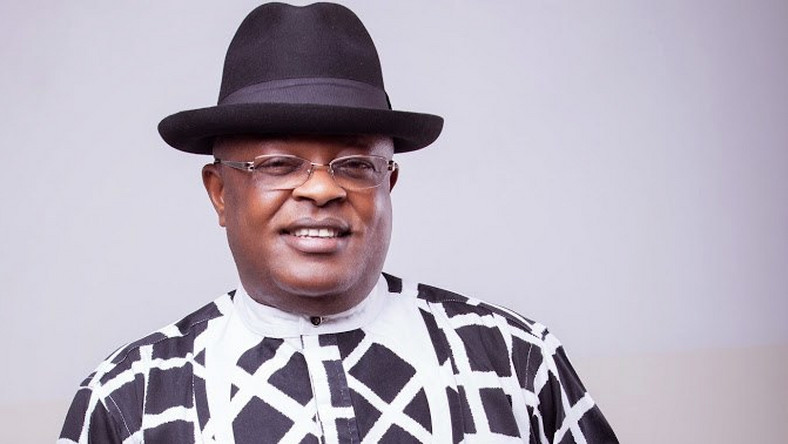 
Ebonyi State Governor, David Umahi who recently defected from the Peoples Democratic Party, PDP to the All Progressives CongressAPC has disclosed that he planned his defection with former Secretary to the Government of the Federation, Senator Pius Anyim and some National Assembly members from the state.

Speaking at an APC stakeholders meeting in Abakaliki, Umahi said Anyim backed out of the plan because he (Umahi) went to see President Buhari over the defection plan without carrying him along.

“They were planning to ambush me, but it is difficult to catch the air.”

On allegation of Anyim giving him N5bn to pursue his dream of becoming Governor of Ebonyi state in 2015, Umahi said;

“I was a deputy Governor, somebody occupying the highest position from the Southeast (referring to Anyim) went and arranged for a N5bn naira loan for me to prosecute the presidential election for his government. I had to sell many of my properties to pay back that money.”

“Let me tell you, I’m not afraid of anybody but I respect everybody. But I have said that if God sent me, this will be the last fight in this state.

“Now, they are dressing words for us. We are in chapter one, in Chapter two, I will publish all that I have done for the leaders of this state.”

Drama As Two Angry Men Park Their Cars In The Middle Of A Busy...

digestng - January 23, 2021 0
Two men have been caught on camera trading blows in Lagos traffic. A viral video captured the moment the two men parked their cars...

“Are Our Faves Talking About Coronavirus Because It Can Kill Them...

RRS Officers Run For Their Lives After Thugs Attacked Their Van...