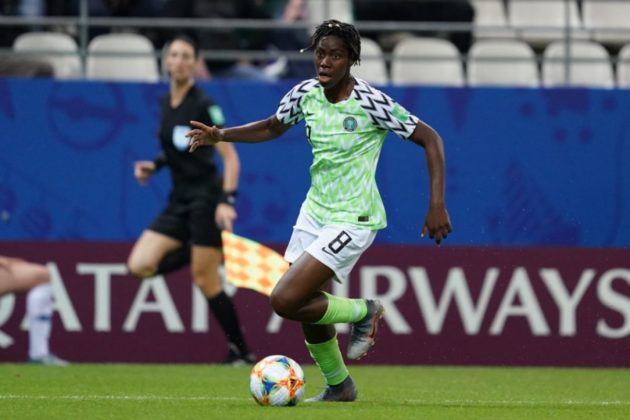 Interestingly, Super Falcons captain and Barcelona star, Asisat Oshoala, is one of the fifty nominees.

The list was revealed by Europe’s football governing body UEFA on Tuesday.

The 26-year-old, who has scored twice in six league appearances for Barcelona Ladies this season, is the only African shortlisted among the 50-women nominated by UEFA.

Oshoala is competing with two of her Barcelona teammates, PSG, Lyon, Arsenal, Chelsea, Wolfsburg and Juventus’ players for one of the striking positions in the Team of the Year.

For the forwards, Barcelona have representation through Oshoala, Caroline Graham Hansen and Jenni Hermoso; Chelsea are represented by Pernille Harder and Beth England; Arsenal by Vivianne Miedema and Jill Roord.

UEFA Women’s Champions League winners Lyon have the most players represented with 13 of their finals squad (including since-departed Lucy Bronze) nominated, two more than runners-up Wolfsburg.

On why Oshoala made the list, UEFA wrote, “Powerful and sometimes unplayable forward with an unerring eye for goal.

“Free-scoring in Barcelona’s title win, either up front on own or partnered with Jenni Hermoso. Another UEFA Women’s Champions League semi-final, a year after scoring in final.”

Fans across the continent are expected to select their line-up from the 50 players who have stood out across European competitions and domestic leagues before the deadline on January 6.

digestng - January 16, 2021 0
Bobrisky Nigerian male barbie, Bobrisky, has bragged about being the No 1 runs girl in Nigeria.A runs girl refers basically to a girl who...

Shocking!! Socialite Ginimbi Bought Casket A Week Before His Death

How The Benue Man Who Set Himself And His Lover Ablaze...

Why We Demolished Building at Wuse 2 While People Were Inside