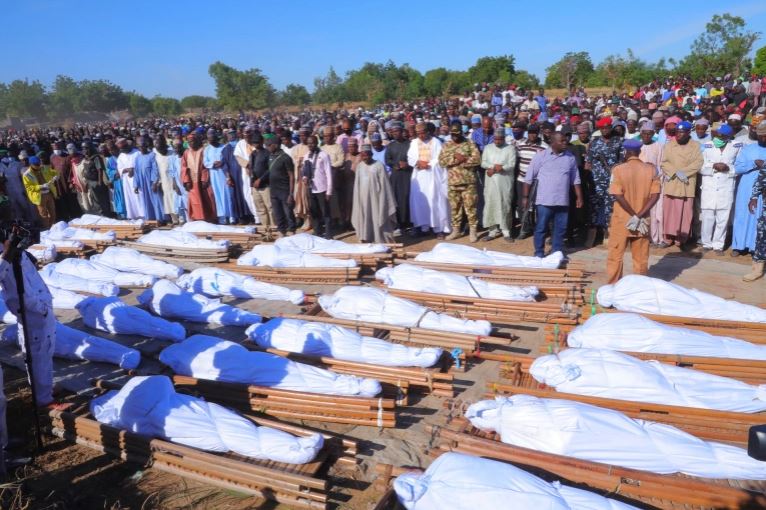 The farmers were slaughtered by Boko Haram terrorists

More bodies of those killed by Boko Haram on a rice farm in Borno state have been recovered.

According to Sahara Reporters, about thirty-eight more corpses were on Monday recovered from the scene of Saturday’s onslaught on farmers by Boko Haram Insurgents in Borno State.

The deceased were slaughtered at a rice plantation in Kwashabe village, about 20 kilometres north of Maiduguri. The insurgents were also said to have destroyed the rice plantation after killing the farmers.

The Defence Headquarters had claimed only 43 people were killed, but a source told SaharaReporters that the death toll had risen to 81 as 38 more bodies were recovered by search and rescue teams on Monday.

He said, “The army restricted us from capturing the scene with our phones; they know what they are doing, and they know they will be exposed. Today alone, 38 bodies were recovered and it will continue tomorrow.

“What happened here was a human harvest, not massacre, the story media and the government is just lying. They did not even talk about the farm produce and rice plantation that was razed ablaze by Boko Haram. Some bodies can never be recovered because flowing water went away with them.”

The killing of the rice farmers has attracted condemnations with some Nigerians calling on President Muhammadu Buhari to sack the country’s Service Chiefs and overhaul the security architecture of Nigeria.

Police Arrest 15 #EndSARS Protesters In Ogun, To Charge Them For...

Oh No! BBNaija Star, Dorathy Bachor Rushed To The Hospital