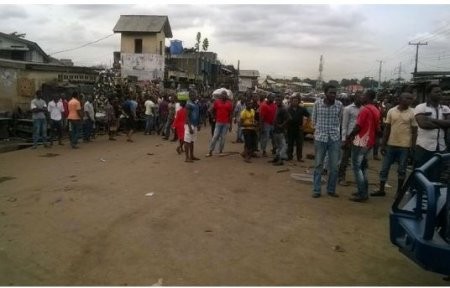 It was serious tragedy that struck recently in Umueje village, Obinze community, in the Owerri Local Government Area of Imo State after a man killed his kinsman.

A resident of the community, who identified himself only as Cosmos, told our correspondent in Owerri on Tuesday, that the youth set the house of the suspect on fire after news broke that the victim had been confirmed dead in a hospital.

The source said trouble started when the suspect and the victim had an issue on the sharing formula of the bride price of one of their sisters, who recently got married.

The source said, “Victor kicked Bright, an electrician in his scrutum over the sharing formula of the pride price proceeds of one of their sisters who recently got married. He immediately lost consciousness and was rushed to the hospital where he was confirmed dead on the next day, Tuesday. Out of anger, the youths set the family house of the suspect on fire.”

The police spokesperson in the state, Orlando Ikeokwu, said the incident had been transferred to State Criminal Investigation and Intelligence Department.

He said, “The súspect is at large and will soon be arrested.”

digestng - January 23, 2021 0
Sunday Igboho The Arewa Consultative Forum (ACF), which happens to be the mouthpiece of Northern Nigeria, has asked Governors of the South West and...

digestng - January 23, 2021 0
The soldier Sire Eneh Gozieboy, a Nigerian soldier, who is currently serving in Borno state, has celebrated his birthday in a rather unique way.Since...

“My In-laws Are Plotting To Burn Me Alive” – Man Cries...

Meet The 47-Year-Old Who Is ‘Allergic To Christmas’ And Could Go...