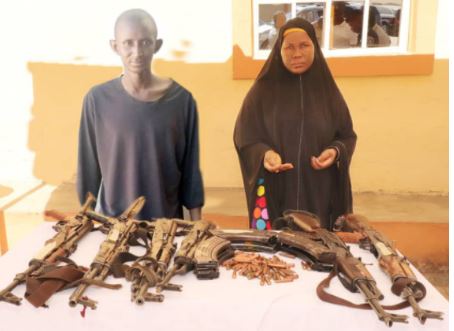 The Nigeria Police Force has clarified after being accused of photoshopping a photo it posted on Twitter.

The photo shows two suspects it paraded with AK49 riffles.

While admitting the pictures were taken separately and merged into one screen for a seamless understanding of the storyline, the police said the photo is authentic.

The clarification became important as the police was ridiculed after the merging was spotted by a journalist.

A BBC correspondent, Stephanie Hegarty, had said that the photo which the police shared on Twitter was photoshopped.

She tweeted: “Nigerian Police have tweeted a picture with clear signs of having been photoshopped – claiming to show two suspects with arms haul. See drastic colour differences, white background under mans arm, lack of reflection, blur around the weapons… Tweet has been up for 7hrs now.”

In reaction to the allegation, the force said “that there was absolutely no misrepresentation or any intention whatsoever to deceive members of the public.

“To set the record straight, in the case involving one Talatu Ibrahim, female, 40years old from Shinkafi LGA, Zamfara State from whom six (6) AK49 rifles were recovered and one other, Duleji Alhaji Abubakar a.k.a Ori jeje who gets arms supply from her to carry out series of kidnapping and armed robbery in Kwara State, the pictures are authentic and true representation of the suspects and exhibits.”

The force said that the pictures were taken separately and merged into one screen for a seamless understanding of the storyline.

“The arms showcased in the picture were the exhibits recovered by Police operatives from the suspects,” the force added.

PHOTOS OF SUSPECTS SHARED ON NPF OFFICIAL HANDLES NOT FALSIFIED

The attention of @PoliceNG has been drawn to comments in the social media erroneously suggesting that the photos of the suspects shared on the Police handles on 1st December, 2020 were falsified. pic.twitter.com/MBGdkSqSHH

“Football Might Damage Your Fallopian Tubes And You May Be Barren ” – Man...

digestng - January 20, 2021 0
Taking to social media, the young Nigerian lady shared videos and images of her engaging in footballing activities, only for the man to...

Story Of 4 Ex-Bankers Who Allegedly Duped Their Own Bank Of...

Wow! Childhood Friends Who Have Known Each Other Since They Were...