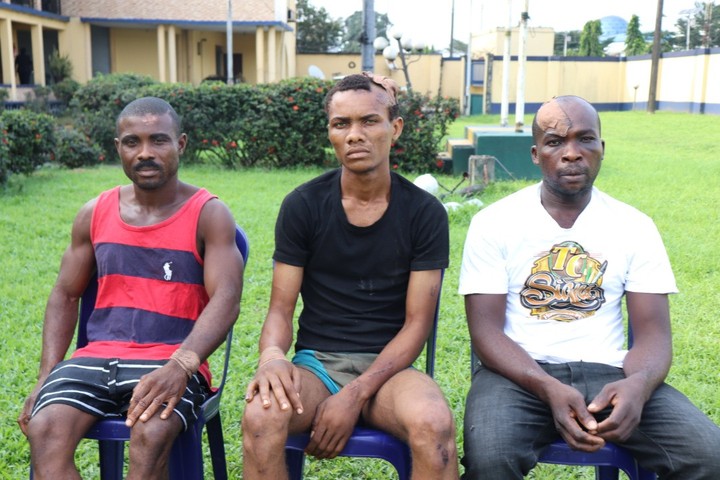 The suspects after they were arrested

A confession has been made by three suspects who bombed the church of Governor Nyesom Wike’s father.

According to TheNation, the suspects confessed that they detonated explosives at the church in Rivers in order to get juicy appointments in the proscribed Indigenous People of Biafra (IPOB).

The suspects made the confessional statements when they were paraded by the Commissioner of Police in the state, Joseph Mukan, at the police headquarters, Port Harcourt.

Mukan recalled that on November 29, the command received a distress call that a church situated at 25 Azikiwe Street was under attack and immediately stormed the place and arrested the suspects.

The police boss said the suspects revealed that they carried out the attack because they were promised juicy appointments in Biafra whenever the republic is realised.

He said preliminary investigations by the police showed that members of the IPOB were deployed into the state to carry out mayhem, adding that the suspects were deployed to attack the mile 2 area.

Mukan said: “We received a distress call that there was a blast at Christian Universal Church International, in Azikiwe, Mile 2. We mobilised our team of bomb experts to the scene.

“When we got there we found out that there was a blast. There was no life lost. Our security partners, the vigilante, had arrested these three suspects. We took them and they have made useful confessions.

“They are Progress Owudinjo, 37, from Etche, Rivers State. Apuro Victor, 25, came from Ebonyi State for this mission and John Okorie, 38 years old from Abia State. According to them they are all over the state.

“They will soon be charged to court while we are trailing their sponsors. IPOB has assured them that if IPOB is achieved they will be policy makers in the government.”

One of the suspects, Owudinjo, confirmed their membership of the proscribed IPOB, adding that they were contracted to carry out the act.

Owudinjo said: “We were contracted to carry out the act. We got there in the night and we detonated the explosive.

“This is the first assignment I am carrying out since I joined IPOB. I have not killed before. I was told that if I do not join in the operations that I will not get anything in the group. They promised us good office.”

Also speaking, Apuro Victor said: “The whole thing was programmed. We were sent by one Chinedu. I don’t know where he came from. I am a member of IPOB.

“The intention of the vision was not to kill anybody that is the reason why we did it at night. I have not done something like this before. Please, forgive me. I have not involved in violent act before. It was programmed.”

Moment Youths Revived Thief With Energy Drink for Another Round of...