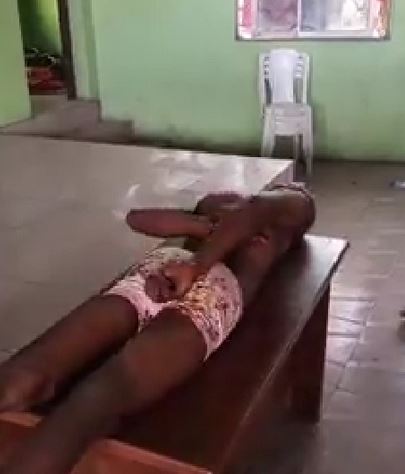 A young man met his waterloo after he had carnal knowledge of a young girl at Ekpan community, in Uvwie Local Government Area of Delta State.

It was gathered that the suspect identified as Erumu, was caught in the act on Monday morning, December 7.

The suspect was the outgoing youth central executive of Ekpan Development Committee and an aspiring Vice President. He is also said to be from a prominent family in the community.

The community President, Stephen Akemu a.k.a Hon. Astone, who confirmed the incident said that Erumu has been automatically disqualified from contesting in the upcoming election. He also ordered the flogging of the suspect to serve as a deterrent to others.

Meanwhile, a member of the Committee, Franklin Ochuko Akemu, warned that such acts will not be tolerated in the community.

“Ekpan community has pass the level of ignoring wrong act and it was displayed again today when erumu  was caught in the act of raping a helpless girl,” he wrote.

“Erumu was an out going central executive and an aspiring vice president but because of this singular act he has been disqualified from all and severely disciplined. This post is a warning message to all who have the habit of wrong act  that there is no impunity, fear or favour when caught so everyone should repent from wrong acts. Before you do think ooh” he added. 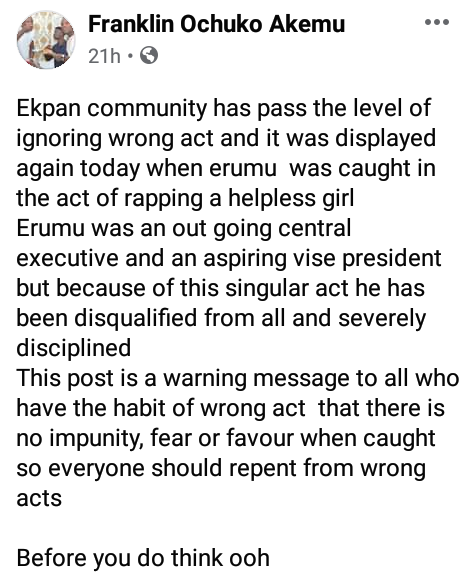 “We Must Regulate Social Media Before It Destroys Us” – Lai...

Despite Being Married, Singer 9ice Is Spotted Caressing Another Lady Inside...