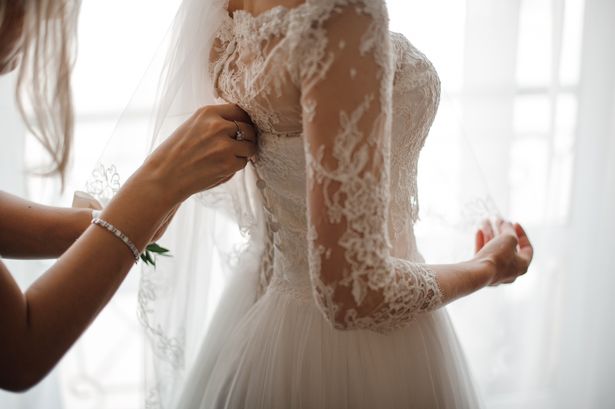 A woman who is about to get married to her lover, has opened up about what the man did that made her sad.

The woman has been left upset and humiliated in the build up to her wedding day because her fiancé doesn’t want her to wear a white dress.

According to her future husband, his relatives are against the colour white because she had boyfriends before meeting him.

“I come from a very religious house hold with strong Christian beliefs and one of the traditions in my family is if the woman getting married isn’t still a virgin they shouldn’t wear a white dress on their wedding day.”

According to him, his mother asked about his girlfriend’s dating history after meeting her.

“My family knows my soon to be wife wasn’t a virgin when I met her because my mum asked me when I started dating her if she was pure, and I was honest and told her she had boyfriends before she met me,” he continued.

He went on to explain that his future wife-to-be was pretty gutted when she found out.

“My wife was really upset when I asked her if she could wear a coloured dress on our wedding day but she agreed, so we’re looking at getting glittery blue dress instead,” he said.

However, it seems the poor woman is also having second thoughts about walking down the aisle at all.

The man continued: “Now she’s saying she won’t marry me because she’s too humiliated by the whole situation, but I really don’t see how it’s a big deal.”

“This is sick, and I can’t believe your girlfriend stayed with you after this,” one person commented.

And another added: “Making her parade down the aisle in something so ridiculous it’s like you’re trying to pin a giant scarlet letter on her.

“I think if you have such a poor opinion of her and want to cause her public embarrassment you should do her a favour and break up now.”

Another person was quick to point out that the whole “not wearing white” thing is not a modern tradition.

“This is not a Christian tradition, nor is it a modern tradition. There is no ‘Christian colour’ for virginity in marriage or anything else,” they wrote.

Faces of Nigerian Man And Woman Deported From India For Living...

Peter Odemwingie Begs Kanu Nwankwo to Forgive Him For Calling His...