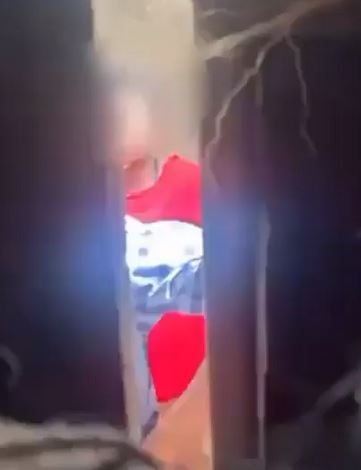 A video has surfaced online showing the moment a lady embarrassed a pastor who allegedly got her pregnant and refused to give her money for antibiotics after she had an abortion in Jahi area of Abuja.

Eyewitnesses alleged that the Pastor who initially had cold feet in giving her money for abortion, invited her over to his house to take the money for antibiotics.

Upon arriving the house, the lady alleged that the Pastor slept with her again and told her that he didn’t have any money to give to her. When she started raising her voice, he reportedly started begging her.

The lady however grabbed a knife while insisting that he must give her the money. While dragging the knife, the Pastor suffered a cut close to his eyes. He came out screaming, alleging that he doesn’t know the girl and accused her of wanting to kill him.

This attracted the attention of neighbours who asked him to rush to Jahi clinic for treatment.  He however went to a police station and accused the girl of trying to kill him.

It was however gathered that the lady who was wearing the Pastor’s shirt and boxers as seen in the video, just passed out from school and wants to do her clearance. She also accused the pastor of also promising to give her money to take care of her clearance. Sources also revealed that the Pastor’s wife is a gynecologist in Bauchi state and rarely comes home.

“The wife of the pastor is a gynecologist in Bauchi, so she’s hardly home.

She did the abortion and was asked to buy antibiotics, she asked the Pastor to give her the money for antibiotics and he was turning her, then he called her yesterday asked her to come to his house around 1am( the time she normally comes) that he was gonna give her the money.

He slept with her last night after that she started asking for the money and he told her he didn’t have, she started raising her voice , and he was begging her…

Till this morning, he went and brought out knife and said she must kill him to collect the money, they were dragging the knife and it cut him close to his eyes.

He came out screaming he doesn’t know the girl and she wants to kill him, that’s when we the neighbors heard and came out

We gave him cloth to hold the bleeding and rush to Jahi clinic.

Instead he went to the police station and was telling them that she tried to murder him.

This girl is a young girl according to her she just finished school and wants to do her clearance, the pastor also promised her money for her clearance This girl was putting on the pastors shirt and also his boxers.

I videoed it myself

The case got to the police station at Jahi, which the main Pastor had to come, they ended up paying her 30 thousand naira”.

Man and Woman Caught After They Kidnapped And Sold Little Boy...

DJ Cuppy Reveals Why She Can’t Join The #EndSars Protest