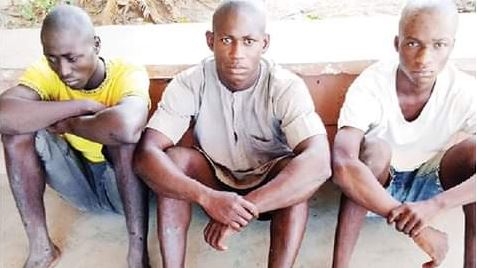 Three notorious phone snatchers have been arrested by the Police in Niger state in Minna, the state capital.

It was gathered that the suspects use charms to dispossess victims of their valuables.

Spokesperson of the State Police Command, ASP Wasiu Abiodun, who confirmed the arrest on Wednesday, December 9, said the suspects, Shamsudeen Idris, 25; Masa’ud Danlami, 20; and Mohammed Isah, 17; all from the Bosso area, were nabbed following a tip-off.

He further disclosed that three receivers of the stolen items identified as Abubakar Surajo, 21; Kabiru Murtala, 18; and Sani Suleiman, 17; all from the Maikunkele area, Minna, were also arrested. All will be charged to court after investigation.

Meanwhile, the suspects confessed to the crime. One of them, Idris said their victims surrender their phones to them without resistance because of their charms.

“And with the help of our charms, they always give us their valuables without us asking for them. We have been in this act for over four years, and we have made fast money from the phones we collected by selling them cheap to members of the public.” he added.

Items recovered from the suspects include charms, eight mobile phones, two knives, and a television set.

digestng - January 18, 2021 0
Odege   A police Sergeant, Ibrahim Odege hs been paraded after he was caught during a robbery operation.   The officer was attached to the Operations Department...

“If You Are A Lady Wearing Trousers, Your Chances Of Making...