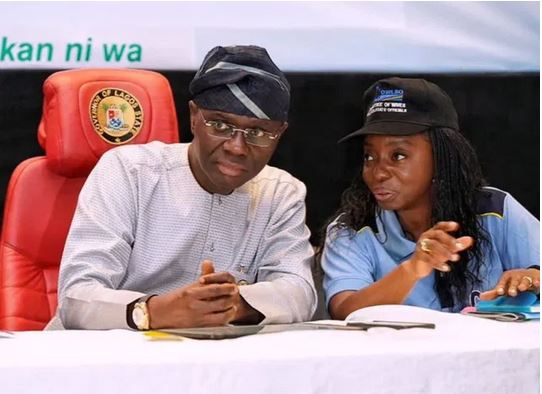 Sanwo-Olu and his wife

Mr Babajide Sanwo-Olu, the Lagos State Governor, and his wife Ibijoke have gone into self-isolation.

The Lagos governor and his wife went into isolation immediately, after one of the close aides to the governor tested positive for COVID-19 on December 10, 2020..

The state Commissioner for Health, Professor Akin Abayomi, announced this in a statement on Friday.

Meanwhile, the statement did not mention the wife but source told Vanguard that she has also proceeded on self isolation.

Recall that Governor Sanwo-Olu was scheduled to perform series of inauguration of projects in Badagry area of the state on Friday, which was summarily postponed till later date.

Also, his wife, Ibijoke, was supposed to be the Special Guest of Honour at celebration of the Year 2020 Universal Healthcare Coverage (UHC) Day, on Thursday, organised by the Lagos State Health Management Agency, LASHMA, but was represented at the event due to the development.

According to Abayomi, “Mr Governor and other members of his team will be tested by the Lagos State biobank today (Friday) but will remain in isolation until the results of the tests are available.

“We are seeing slightly increasing number of COVID-19 positive cases in clusters in Lagos and all Lagosians should adhere to the prescribed advisories of safe distancing, good hand and respiratory hygiene and avoidance of unnecessary gatherings.

“This is not the first time Mr Governor is having the COVID-19 test. He has had at least three since May when he announced that 10 of his aides had tested positive for the virus.”

Also, the source said the Head of Service, Mr Hakeem Muri-Okunola and prominent state government officials ate currently on self isolation as a result of the development.

Nigerian Lady Finds Out That The Man She Was Cooking For...

”You Are The Husband Every Woman Wants”