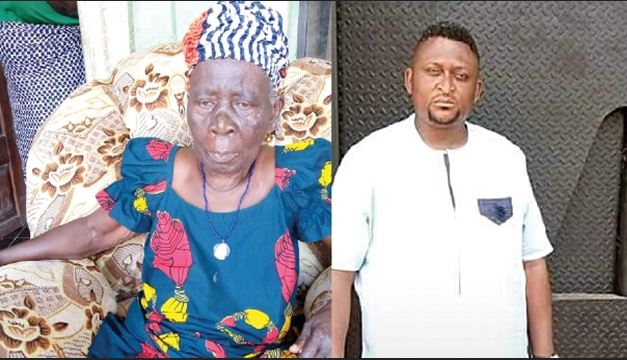 An 86-year-old Nigerian woman, Mrs Comfort Mmezi, has told of how police officers ave made her life miserable .

Mrs Mmezi is the mother of a 41-year-old man, Jude Mmazi, who was shot dead by a trigger-happy policeman on his way to a wedding in Owerri, Imo State. The widow tells CHIDIEBUBE OKEOMA that her son’s killing has made life miserable for her

My name is Mrs Comfort Mmezi. I am from Ndiohiaoweree Umuduruaku, Umuamusa community, Amucha, Njaba Local Government Area of Imo state. My husband died many years ago. Jude Oguzie Mmazi, who was shot dead on Saturday by policemen, was my only surviving son.

How did you receive the news of his death?

Somebody called my only daughter, Assumpta, on the phone that Oguzie, who was with us one hour before that time, was dead. At first, Assumpta and I took it as an expensive joke but the person pressed further that Oguzie was drenched in a pool of blood in his car on the Owerri-Orlu Road. It was at this time that we took the information seriously and immediately my daughter, who is now my only child, left for Owerri. According to my daughter, she met Oguzie dead at the Federal Medical Centre in Owerri, where he was rushed to.

What came to your mind when you realised that Oguzie was dead?

Immediately, I realised that my life was finished. I realised that life hasn’t been fair to me. I lost my husband many years ago. And I have lost many children. I gave birth to 10 children but as we speak I only have one living daughter. In short, Ifeobu Jonathan, my son, was also shot and killed by a policeman in Lagos some five years ago. Ifeobu was older than Oguzie. I don’t know what I have done to policemen. They have killed two of my sons. They killed Ifeobu in Lagos five years ago and now they have killed Oguzie, my only surviving son who was supposed to bury me. I don’t know what to do. My life, my family is shattered.

What kind of a person was your son?

Oguzie was a good son. He never joked with his mother. He was the one who took me for surgery and he came home when it was time to take me back to the hospital for the removal of the sutures. That was what brought Oguzie Mmezi home. He came to take me, his mother, to the hospital to remove the surgery thread. On Saturday morning, he called his wife and spoke with all his children, promising to buy them ice cream on his return from the village. That morning, as he was leaving, I told him that my kerosene had finished and I gave him a five-litre jerrycan to buy kerosene for me when while returning from Owerri. Till this moment, I have not seen my son and they are telling me that he was shot and killed by a police officer for no reason. Oguzie was the only eye with which I was seeing the road. That I eat everyday was because of him.

What about his family?

Oguzie has four children – three boys and a girl. His firstborn is seven years while the last child is about two years. His young wife had been forced into widowhood. What kind of a life is this? Why is life being this wicked to me?

What was his occupation?

Oguzie was into real estate business. He was based in Owerri with his family. He had also lived in Italy. That was the time he built this house for the family.

Oguzie was a good man. He was a wonderful son, a caring husband and a loving father. He was awesome. I don’t know if I will survive this shock. He was the breadwinner. That I ate was him. How do I eat now? Who will bury me when I am gone? Who takes care of this family? Who will take care of his young family, his little children? Oh my God, my life is finished! This is a dream I haven’t woken up from.

Do you hope to get justice over this?

Oh my God! Are you really telling me that my only surviving son, Oguzie, my son is dead? My lookalike son, who was just 41 years, dead and gone like that? God forbid. I want justice from the police hierarchy. They must ensure that his four little children, my grandchildren that he left behind are trained well. This country has a Constitution and the Constitution should be applied in trying these policemen who killed my only surviving son.

I Was Beaten In Police Custody

“Getting Married To A Married Man Is The Best Thing”

Ajimobi’s Wife Super Store Goes Up In Flames In Ibadan