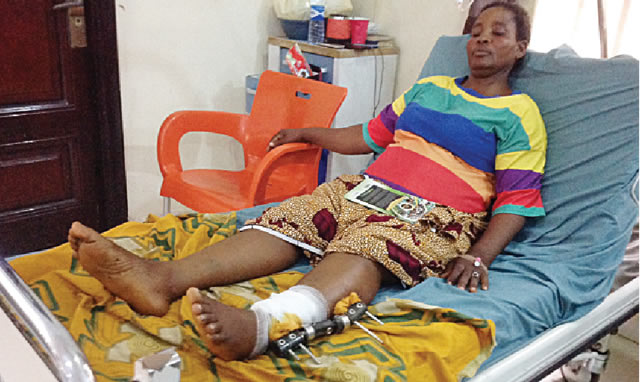 Mrs Ebinipere Onojamadu, a Nigerian woman tells of how she was shot by policemen in this The PUNCH interview.

Mrs Ebinipere Onojamadu is one of the victims of the reported shooting by a team of policemen on patrol around Tombia market in Yenagoa, Bayelsa State, on November 24, 2020. She narrates her ordeal to DANIELS IGONI

How were you shot by the police?

On that day, I was with some visitors at home when I was told a  member of my church gave birth through Cesarean Section. So, I decided to go to the market to buy a few things to prepare food and take it to her. One of my friends accompanied me to the Edepie-Etegwe roundabout (popularly called Tombia) market. We were still buying foodstuffs around the bridge when we heard gunshots.

At what time did you hear the gunshots?

It was at about 6pm. My friend then tapped me and told me to leave the market because of the gunshots. So, as we were about to leave, I tried to turn but I couldn’t. I tried to raise my leg but I couldn’t as well. She asked me why I could not turn, thinking I was playing a prank on her. But I told her I was serious, that I could not turn. As she tried to drag me, I fell on the ground. When I fell, I knew something had happened to me. The next thing we saw was my bone was already outside and blood was also oozing out of my leg. I started shouting for help and people came and tried to lift me up. As they tried to lift me into a ‘keke’ (tricycle), I saw the policeman that shot me and I told him, ‘You just shot me.’ He looked at me and left without saying a word. But I could not get his name and number. One of the people, who came to help me, also told the man (policeman) that he shot me, but he (the policeman) shrugged. I told the policemen that God would judge all of them. They were driving into the town because they had gone towards the Tombia-Amassoma Road. But I don’t know where they were coming from.

So, after I was carried onto the tricycle, I told the rider to pursue the police patrol van but he said there was heavy traffic. But I  still encouraged him to move and pursue them and he finally agreed and we went after them. They (policemen) parked across the bridge at the other side where yams are sold. When we got there, I was able to write down the number of the vehicle, ‘TERRORPOL NPF 8643C’; it was a white Hilux van. Someone helped me with a marker pen and I wrote it down on a paper.

How did you get to hospital?

I told the rider of the tricycle to take me to hospital. My friend was crying but I told her not to worry. Someone who knew me in the market ran to my house to inform my neighbours because my husband was not around. I also called my younger brother and they all came to meet me at the hospital. Later, my husband also came.

Did you lodge an official complaint about the incident?

The Commissioner of Police was called and he came to the hospital and asked me what happened. I narrated everything that happened to him. He also asked me if I was able to get any information about the policemen and I said, ‘Yes’.

What else did he do?

He left. But my husband also called some journalists and they came the following morning. I narrated what happened to them. One other victim, a girl, was rushed to the same hospital, but I don’t know where the others were taken to.

Was any bullet removed from your leg?

No bullet was removed from my leg. The bullet pierced my leg and came out from the other side.

Have the policemen involved in the incident shown any concern since you were hospitalised?

What about the policeman that shot you?

They said he had been arrested but I don’t know if it’s true. The CP and his team also visited the scene of the shooting at the market, and according to them, they came to take responsibility and care for us over the shooting incident. But in terms of feeding, they have not done anything, to say the truth. We have been taking care of ourselves.

I am a caterer. I cook food for weddings and other events and also make cakes. I have a little girl who is three years old, my other children are in school. As it is now, I cannot work. I had a job to do on Saturday (November 26, 2020) but I could not do it because of this incident. I also have a wedding to cook for on December 12, 2020, but I won’t be able to do anything due to my condition.

What do you intend to do about the incident when you are discharged from hospital?

If they don’t take any responsibility, they will pay for damages. I will inform my lawyer.

What is your advice to the police authorities?

The police authorities should caution their men. One cannot walk freely in this country. As a policeman, you are not supposed to release bullets in the marketplace, even when you want to clear the way because that’s where we go and look for our daily bread. The policeman came and released bullets to kill innocent people. If the bullet did not hit my leg, who knows whether it could have killed some people because it’s like I was standing in the gap for others around me. People were standing behind me. There was a lady that had four bullets in her body. One of the wounded is a student that helps her mother to sell periwinkle to train her at school. So, authorities of the Nigeria Police should caution their men. The policeman that shot us should be brought to justice.

“If I Don’t Find Love, I’ll Have My Kids Through Artificial Insemination

digestng - January 21, 2021 0
Prof. Banji   Nigerians waiting for President Muhammadu Buhari to end killings by some criminal herdsmen in the country have been told to stop dreaming.   The...

“If I Don’t Find Love, I’ll Have My Kids Through Artificial Insemination

digestng - January 21, 2021 0
Alex Reality star, Alex has stated that she cannot marry a short man and that is very important. The BBNaija housemate who shared a video...

Shocking Story Of ‘Friendly’ Neighbour Who ‘Kept A Child As S*x...