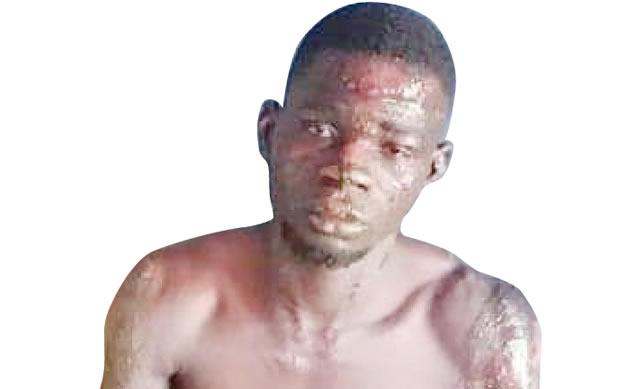 In what will come across as a really shocking development, a man, Jude Atoza, has been nearly burnt to death in Benue, The PUNCH reports.

Indeed, one subject of public discourse that has refused to go away all week in Benue State is the story of a woman, simply identified as Ashi, who allegedly set her lover, Jude Atoza, on fire in Gboko town on Monday, December 7, 2020. Atoza had reportedly told Ashi he wanted to quit the relationship.

Many people in the state find the incident particularly troubling because just three weeks earlier, a man identified as Nicodemus Nomyange, said to be in his 40s, set himself and his girlfriend, Shininenge Pam, on fire in Makurdi, killing both of them. In this case, Pam had angered Nomyange, who had a wife and children, when she refused to accept his marriage proposal.

Atoza survived but he suffered severe burns to nearly all his body.

He lay asleep, helplessly on a bed in a private clinic in his area where he was taken by neighbours after the incident, during our correspondent’s visit. An unpleasant smell pervaded his bed area which became worse with each step that got our correspondent closer to him. Yellow pus seeped down several parts of his body, as he cut a pitiable, lonely picture.

A man named Freeman Shimatu, identified as a kinsman of Atoza, as they are both from Ushongo Local Government Area, said Atoza had had difficulty speaking since the incident.

He added that though the suspect fled to her village in the neighbouring Buruku Local Government Area of the state after setting Atoza on fire, she had been arrested by the police.

According to him, Ashi had been living with Atoza for the three years as a live-in lover before the incident occurred. He added that Atoza had earlier told him on the day he was allegedly burnt by Ashi that he had a disagreement with his lover and asked her to move out of his house.

“I know that the lady had been living with my ‘brother’ for almost three years and they had promised to marry each other,” Freeman said.

“Since I don’t live with them, I don’t know what happened but Jude (Atoza) told me before the incident on that fateful day that they had a quarrel and he asked her to leave his house, which she did.

“But the lady later came back around 1:30am with three men. She poured a substance suspected to be petrol into his room and lit a match, which caught fire.

Some of Atoza’s neighbours also confirmed that the lovers had been having some disagreements before the incident, saying part of the problem bordered on Ashi’s alleged disrespect for Atoza’s mother.

One of the neighbours, Haainya Aondoakula, said Atoza’s decision to end the relationship after a recent dispute between them led to the ‘crime of passion’.

“The little that I know is that the young man and woman were living together before they had the misunderstanding that led to this (burning),” he said.

“One of the major problems they had, according to Atoza, was that the lady did not have respect for his mother. The issue led to a heated argument on the day the incident happened and he told the woman to leave his house.

“He thought that was the end of it but he was wrong. About 1.30am, the girlfriend reportedly returned to the compound with three men. They tore open the window net and started pouring a substance suspected to be petrol into the room through the window.

“Jude told me that he saw his girlfriend as she was trying to force the net open. He said his estranged girlfriend threw a container filled with liquid into the room where he was with his mother and a two-year-old child and immediately lit a match and took off.

“The whole room caught fire, and the young man, confused and helpless, battled to save his mother and the little child in the room.”

Ashi was said to have locked the entrance door from outside and taken off on a motorcycle.

Another neighbour, Tony Torkwa, said it was Atoza’s cry for help that alerted other people living in the compound to the arson.

“We were asleep when suddenly we heard a loud cry from his (Atoza’s) room and we all rushed out to see what was happening.,” Torkwa said.

“To our surprise, we saw that a room was burning and some people were struggling to escape from the fire. Although all three persons in the room are still alive, the young man had severe burns while his mother and a child living with them sustained minor burns.

“He told us that his girlfriend threw a container with fuel into his room, lit a match and ran away.”

As at the time of filing this report, Benue State Police Command spokesperson, DSP Catherine Anene, said she heard (though informally) that Ashi had been arrested.

digestng - January 26, 2021 0
James Brown Nigerian cross-dresser James Brown took  to social media to shade his senior colleague, Bobrisky.The pair have been at ‘war’ for some...

Tinubu Makes Plans Ahead Of 2023 Presidency As New Campaign Group...