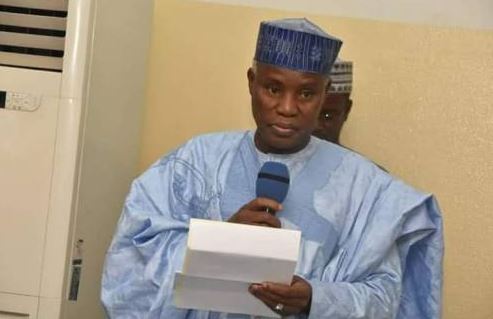 Major General Bashir Magashi (rtd), The Minister of Defence has disclosed that the students of the Government Science Secondary School in Kankara, a Local Government Area in Katsina state, who were kidnapped by bandits will return home to their families in the next few hours.

Magashi gave the assurance when he led a delegation of the Federal Government, including the service chiefs to Katsina to sympathize with the parents and teachers of the victims, as well as the state government over the abduction on Sunday, December 13.

“Today, we are here also to symphathise with you over the recent abduction of secondary school students which is more or less a ruthless exercise conducted to tamper with the education of the students.

With the brief we received from the sister security agencies in the state, this task will be very simple to accomplish.

Within the next few hours, we will ensure that these people are back without any collateral damage to the people of Katsina State. We have strategised.”he said

Photos Of Omoyele Sowore Brought To Court In Handcuffs

Horror! Shopping Mall Goes Up In Flames In Abeokuta (Photos)