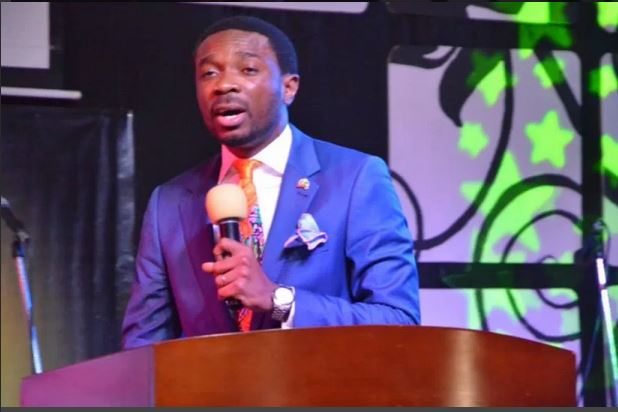 The pastor has been accused of sexual misconduct in the last couple of days.

The clergyman was called out on social media following revelations from alleged victims and former members of his religious organisation.

Mr Alabi, a graduate of Obafemi Awolowo University, Ile-Ife, Osun state, started his ministry in Ile-Ife where he led a student fellowship in the school for years even after graduation. He later moved to Lagos State, where the RICC is now headquartered.

The ministry, which he runs alongside his wife, Funlola Alabi, also extends to other university campuses through the youth arm of Rhemaword which is called CHRISTTRIBE.

Mr Alabi is also the lead pastor at Heritage of Faith, another Lagos-based church.

It should be noted that Mr Alabi is the third clergyman to be accused of sexual impropriety over the past week.

PREMIUM TIMES had reported how a pastor and the coordinator of MINE Teenage Ministry, Timi Adigun, apologised following a similar allegation.

In his apology letter, he admitted to inappropriate behaviour with some girls over a couple of years but denied having sexual intercourse with any of them.

The Diocesan Bishop of the Church of Nigeria (Anglican Communion) of Ekiti West, Rufus Adepoju, was also suspended for alleged involvement in sexual misconduct.

Mr Adepoju, according to a letter dated December 11, 2020, seen by PREMIUM TIMES, was said to have been caught with the wife of a priest under his employment and care.

Victims of Mr Alabi’s alleged sexual misconduct have shared their experiences via a form put out by Temitope Badejo, a lawyer and former member of his church.

The responses of two ladies, which Mr Badejo shared on Twitter, claimed Mr Alabi carried out the acts while he was still a pastor at OAU.

“I started attending Rhemaword back then in my pre-degree 2012. The church was amazing and I was in awe of the Lead pastor cos I had never seen anybody so sound in word and doctrine. I looked up to him and the word helped me find my place in God. Fast forward to my 100 level when I resumed in OAU Ife, I continued attending the church and started talking to the pastor directly because he told us he was our spiritual father and could talk to us about everything.

”One day, we were chatting on BBM, he asked me if I had a boyfriend, I said yes, he asked if we were intimate I said yes, trusting Pastor Peter Ayo Alabi completely, till he started asking me uncomfortable questions like my favourite sex position, what turns me on, the whole 9 yards, I was shook to my bones, confused, lost but somehow I kept talking till he came to pick me at Anglomoz, he took me to one hotel all the way to Moro and sexual cajoled me, we had sex, this continued for more than a year, in his house, hotels, my house, this man didn’t let me be,” the anonymous respondent claimed.

Another respondent, who claimed to be a chorister in his Ile-Ife church between 2011/ 2012, said the pastor made sexual advances at her in the name of helping her overcome sexual urges.

“He always preached about accountability to our spiritual heads/pastors and I was struggling with my sex life (so I thought, cos I slept with my boyfriend) which he was aware of. He even made an accountability chart/sheet then to tick when and if I thought of sex. I had to travel home (Lagos) on a weekend and as it was a rule to always inform him of our movements or seek travel permissions, I used the opportunity after one stewards’ meeting to inform him. He told me to come back the next day. At 5 p.m. so we can go through the accountability sheet before travelling…

”His cousin stayed with him, but he never left the house, and that was the first time would be meeting just the two of them at his home then around Ede road (Damiko or something have forgotten), in Ife. Before we started, his cousin went out, leaving just the both of us. So, we started the session as usual by ticking and reviewing the sheet and then he asked if I saw any movie that had sex scenes, I thought he meant blue films but later asked of any movie at all. I told him no. He opened my Laptop (cos he was using my Laptop that period for church work), and played a movie, went straight to the sex scene and put it on repeat.

”You can imagine my shock. Why would my “therapist” be showing me what he wanted me to stop? That awkward moment put me in shock, then he went further to ask questions. Like “did you enjoy your last sex”? “Has anyone given you a blow job before?” she stated.

According to her, Mr Alabi took her to his room afterwards, touching, trying to kiss her and going for her trouser zippers.

“Then I thought if anything should ‘mistakenly’ happen shey wouldn’t have failed this test and maybe it’ll be said that I seduced him sef. Especially since we are at his place. I struggled to get to the door and threatened to shout. Then he stopped.”

”It’s not my story to share but Peter Alabi was the tipping point for my exit from the church and Christianity as a whole. He pushed me out of the church because he was the very last person I expected this from,” a Twitter user, whose friend was allegedly harassed by the clergyman, wrote

Deji Onadeko, an On-Air Personality and former member of Mr Alabi’s Church in OAU, prayed that justice be served.

“I pray that God again comes through for us and teaches us to find solace lying somewhere in our stories. I pray that with @pastorpeealabi, justice is served and nobody will escape the long hands of the law under the guise of religion or politics,” he concluded in a Twitter thread.

Meanwhile, the security department of the Obafemi Awolowo University has commenced an investigation into the allegations levelled against the pastor.

“Following the barrage of allegations of Sexual Impropriety against a certain Peter Alabi, the Security Department has launched an investigation to establish the veracity of the claims, this is to further entrench our zero-tolerance against sexual predation,” an official statement from the school read.

Also, the Rhemaword International Christian Center, through its official line, informed PREMIUM TIMES that Mr Alabi will respond to accusations of sexual harassment against him on Sunday.

“We got a message this morning and he has promised to respond on Sunday. You know we also have to hear from him,” the respondent of the church’s official telephone number told PREMIUM TIMES on Wednesday afternoon.

Adedayo Oluwafikewa, Mr Alabi’s personal assistant, confirmed this but told PREMIUM TIMES that the response won’t be made public as it is intended for a section of the church.

“Someone Called Me Hoe The Other Day. I Accepted Because Everybody...