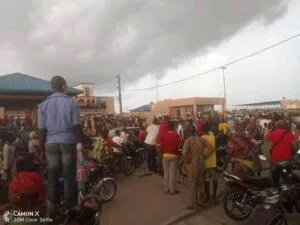 The Federal Government had on August 21, 2019, ordered the closure of Nigerian borders to curb smuggling of goods and weapons.

“The president has approved the reopening of four land borders, namely– Seme, South-West, Ilela, North West, Maigatari border in the North-West and North-Central and Mfum in the South-South.

“These four land borders will be opened immediately, while the remaining land borders are directed to be reopened on or before Dec. 31,’’ the minister told State House Correspondents in Abuja on Wednesday.

She said that Buhari also directed that while the borders were being reopened, the ban on the importation of rice, poultry and other products still subsisted and would be implemented by the border patrol team.

Meanwhile, a large number of stakeholders and residents of Seme border community have expressed their joy at the development and commended Buhari for reopening the land borders.

Fanu said that many freight forwarders had lost their means of livelihoods as a result of the closure because their goods were stuck on both sides of the border.

The Onimeke of Imekeland, Oba Abraham Ogabi, also said that the reopening of the land border was a welcome development.

Ogabi said the closure had paralysed socioeconomic activities of border communities which relied on the trade between Republic of Benin and Badagry communities.

“We are in the border area, some of our people are married to their women and we do legitimate business with them.

“But the closure has affected our socioeconomic relationship with the border communities of Benin Republic.

“We thank the President and members of the FEC for reopening of the land borders,” he said.

Also speaking, the Alashipa of Ashipa in Badagry, Alhaji Shehu Ayeni, said the closure had affected his community which shared land borders with Republic of Benin.

The traditional ruler, however, appealed to the government to ensure security operatives were posted to necessary points in the area to block the influx of contraband into the country.

Ayeni said the reopening of the Seme land border would put smiles on the faces of many residents of the community.

‘Until Yemi Osinbajo Is suspended, I Will No Longer Attend RCCG...