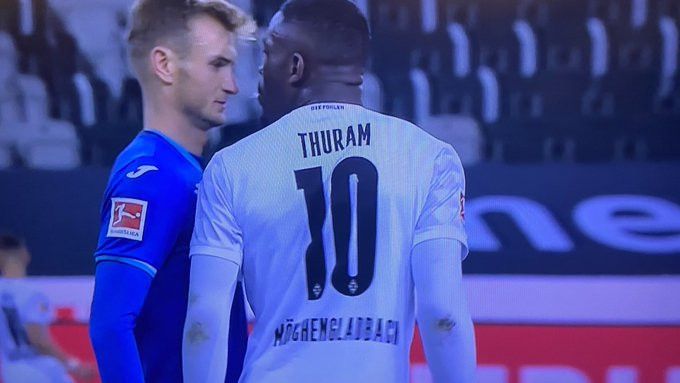 French international, Marcus Thuram has been red-carded and banned for spitting at his opponent during a match.

The Borussia Monchengladbach striker was given a ban for six matches by the German Football Association (DFB) after he spat at Hoffenheim’s Stefan Posch.

The 23-year-old French footballer has already been fined a month’s wages by Gladbach for the incident  which was spotted by VAR and resulted in a red card in Saturday’s 2-1 loss at Borussia-Park.

Thuram, who is the son of France World Cup winner, Lilian Thuram, insisted it was not a deliberate act but apologised to Posch, Hoffenheim, and his Gladbach team-mates, saying he would “accept all of the consequences of my gesture”.

The DFB confirmed on Monday that Thuram will serve a five-match ban in the Bundesliga and DFB-Pokal, with the sixth match suspended until December 21, 2021.

France international Thuram, who has scored four goals in 20 appearances in all competitions for Gladbach this season, has also been fined €40,000.

Commenting on the incident at the weekend, Gladbach sporting director Max Eberl said: “I had a long discussion with Marcus this morning, in which he apologised to me and to the club once again for his actions.

“We have known Marcus for almost two years, we know his background and his family. Saturday’s actions do not represent that. Marcus is devastated and has assured me that he did not purposely spit at Stefan Posch.

“He told me that during a dispute with Stefan Posch, he had unintentionally spat after cursing several times in French in the heat of the moment.

“He knows that this doesn’t change anything and that the pictures speak for themselves, and that the sending off was the right call.

“I believe Marcus because I have come to know him as a reflective person with a great demeanour. He did it, but he did not do it with intent.

“As a club, we will fine him a sum equivalent to one month’s wage for his behaviour that led to the dismissal, which will be donated to a good cause. Marcus has accepted this and has also offered to engage with this social cause on his own behalf.

“Marcus apologised to Stefan Posch, Hoffenheim, his team-mates, the coaching staff and the Gladbach fans, and I would like to do this again explicitly on behalf of Borussia Monchengladbach.

“He made a big mistake and is being punished for it. He remains the same person we know, and we will stand by him.”

How Bamalli Broke 100 Years Jinx To Become Emir Of Zazzau;...

LASG Debunks Claim That An #EndSARS Protester Was Killed By Police...