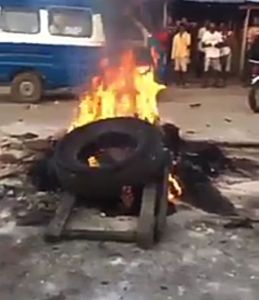 The thief burnt alive in Delta state for stealing

A thief has met a sad end after being caught by an angry mob in Delta state.

According to HGS Media Plus, the unidentified thief was beaten and burnt alive this morning by angry mob for stealing at Ugbokodo in Okpe Local Government Area of Delta State.

The incident happened in the early hours of Tuesday morning at around 7-8am, December 22 in Ugboko.

Father Gets His PhD At 65 To Fulfil The Promise He...