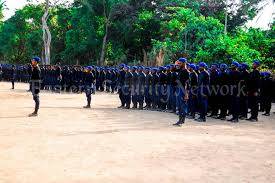 Food supplies have been given to the security outfit launched by the Indigenous Peoples of Biafra.

This is as the Nigerian military is combing forests looking for them.

According to Sahara Reporters, operatives of the Eastern Security Network were deployed to forests and villages to keep communities safe.

The food supplied by IPOB is to sustain them as they seek to flush out bandits and armed invaders.

SaharaReporters learnt that the ESN operatives in about four local government areas of Ebonyi State were given the food donations ahead of their deployment to the forest areas.

“IPOB from Four LGAs in Ebonyi North contributed and bought these food items for our ESN operatives. The IPOB leaders noted that the food supplies would enable the operatives not to go hungry while defending the state against Fulani bandits and terrorists.

“This last yuletide was different as the cases of kidnapping and killing went down. The South-East is beginning to own up to its own security,” an ESN top official noted.

Although most South-East residents are satisfied with the presence of ESN, the Nigerian government and the military are discreetly searching for the camps of the operatives because they are not accepted by the government.

The South-East governors have also not recognised the ESN.

The Nigerian Army last week deployed combat helicopters, gun trucks and soldiers to search some suspected forests in the South-East states where the ESN, recently launched by Nnamdi Kanu, was said to be camping.

SaharaReporters had exclusively reported that the military search had been going on for days, and had no time frame, as the army was acting on “orders from above.”

A video, from the drones and hidden cameras believed to be installed by the ESN, captured the Nigerian Army helicopters, their vehicles and soldiers searching for the camp of the ESN for possible arrests.

Kanu, a leader of the Indigenous Peoples of Biafra, on December 12, 2020, launched the ESN, saying the regional security outfit, just like Amotekun in the South-West, would help to tackle crimes and criminalities.

Two days after Kanu launched the ESN, the Yoruba socio-cultural group, Afenifere, lent its support, noting that Nigeria must embrace regional policing as the only remedy for insecurity.

Photos Of Woman Whose Skull Caved In After A Chair Fell...