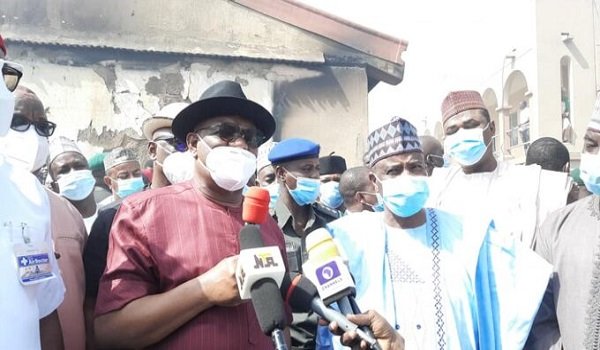 A N500 million donation to Sokoto state by the Governor of Rivers State, Nyesom Wike has been greeted with loud uproar.

According to TheNation, Wike donated the sum last week to assist the Governor Aminu Tambuwal government to rebuild a section of the burnt Sokoto Central Market.

While the Peoples Democratic Party (PDP) and some aides of the governor defended the gesture, an All Progressives Congress (APC) former spokesman in Rivers State, Chris Finebone, and an ex-agitator, Sobomoba Jackrich, described it as “selfish and politically-motivated.”

Jackrich, who is the Convener, Network for Defence of Democracy and Good Governance (NDDGG), said his group was worried about the way Wike spends the state’s resources.

He explained that while NDDGG sympathised with the fire victims, it was against the governor’s decision to embark on unaccounted obligations in the face of unpaid pensions to retired workers.

The ex-agitators said: “The NDDGG wish to sound it loud and clear that Sokoto is not a territory of Rivers warranting such unaccountable obligation. It is worrisome that this official menace is coming just a few days after Governor Wike announced that his government had received the over N78.9bn refunds approved by President Muhammadu Buhari, being money owed the state from the construction of federal roads by past administrations of the state.

“The action of the governor clearly proves that he does not seem to have a protected future at stake or vision for our dear state. He is not bothered that the state ranks number one on the unemployment index having the highest unemployed population as published by the National Bureau of Statistics and other institutions.

“This is a state without any functional profit-making enterprise or an industrial park. The question to ask is where is the governor deriving powers to make such arbitrary financial dissipations of our public funds that were not captured in any accessible budget if not for political trading purposes?”

“People believe that Governor Wike is trying very hard to buy the 2023 presidential or vice-presidential ticket of the PDP with Rivers taxpayers’ money. This is the latest in the string of politically-motivated donations the governor has been making across Nigeria,” the former APC spokesman in the state said.

He added that “this unbridled profligacy flies in the face of the fact that Rivers pensioners are owed gratuities and pension” while …even some victims of market fire disasters and floodings in the state are ignored by the governor.

But the state Commissioner for Information and Communications, Paulnus Nsirim, described the criticisms as “very poor and sad reflection of who we are as Rivers people.”

“As Rivers people, we have our challenges but that doesn’t mean we have lost our sense of humanity and this is what Governor Wike epitomises with great equanimity and humility.” Nsirim said in a statement.

“It is … with an even greater sense of deep sadness and disappointment that we read how some people described the gesture as evidence of financial recklessness,” he added.

The commissioner explained that the government had noticed in recent times, the vehemence with which APC apologists expressed their “bitterness and selfishness” each time the Wike administration extended a hand of friendship and support to a sister state.

The statement added: “This is not who we are as Rivers people. The Rivers man is kind, benevolent, cosmopolitan, generous and accommodating.

“One would have expected some of these critics who had served in government before to be at the forefront of preaching and promoting national brotherhood and unity.

“They ought to know better about how government operates, instead of this unfortunate display of petulance, deliberate ignorance, hate-mongering and a kindergarten attempt to align with misguided public opinion borne out of spontaneous envy and uncharacteristic resentfulness.

“This is a sad and imported mindset and not the Rivers spirit at all.”

“Rivers people will recall that one of the very first actions of Governor Wike, when he assumed office in 2015, was to clear the four months pension arrears he inherited from the previous administration, before entrenching the regular payment of monthly pensions, which is going on regularly till date.”

“Ironically, the opposition has continued to deceive Rivers people and members of the public with the impression that all pensioners were being owed by the state government.

“But the real truth is that those who are yet to receive their pensions were under the defective Contributory Pension Scheme operated by the immediate past APC administration in the state.

“Even the pensioners in their peaceful protest in August 2020, confirmed that Governor Wike was not the cause of their problem but blamed the immediate past administration of the state for their plight.”

Also, the state chapter of the PDP in a statement by its Publicity Secretary, Tambari Gbara, expressed surprise that Wike’s patriotism had been politicised in some quarters without considering the substance of his gesture.

The PDP described the criticisms as uncharitable and ill-mannered, arguing that the act of giving to the needy remained a virtue sanctioned by God.

It added: “This is not the first time Governor Wike is extending his benevolence to his colleagues, more so, he is not the only governor who has donated to the Sokoto government, nor is he the first to toe this line of action, yet they were never greeted by such criticism as we have today.

“… Governor Wike is not the only one that has donated to assist in that incident and many more donations may be on the way to help the people of Sokoto State.

“Our project governor has promised Rivers people that despite all the projects he has done so far, that he will embark on more projects in areas that have not been covered.”

My Boss, Umar Instructed Me To Describe Those Who Allegedly Assaulted...

Nigerian Singer, Patoranking Gifts His Sister And Her Hubby A Car...