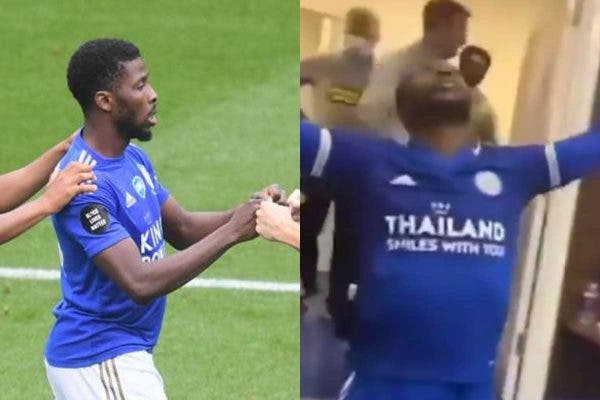 Leicester Forward and Super Eagles star, Kelechi Iheanacho has been given an honourable mention by world football governing body FIFA.

FIFA joined many fans in celebrating Iheanacho for his hat-trick against Sheffield United in Sunday’s Premier League clash.

Iheanacho bagged his first ever hat-trick for Leicester City who thrashed Sheffield United 5-0 to strengthen their push for a top-four finish.

He joined the likes of Nwankwo Kanu, Yakubu Aiyegbeni, Efan Ekoku and Osaze Odemwingie as Nigerians who netted a hat-trick in the Premier League.

Iheanacho has now scored six goals in 16 Premier League appearances for the Foxes this season.

Also, he has found the back of the net 10 times, three assists in 27 appearances in all competitions this term.

And reacting to his hat-trick heroics, FIFA wrote on their verified Twitter handle: ”The first time we saw Kelechi Iheanacho? 4 goals for the Golden Eaglets in a 6-1 win against Mexico on his U17 World Cup debut.

“The last time we saw him? 3 goals for Leicester in a 5-0 win against Sheffield United in the Premier League.

🇳🇬 The first time we saw @67Kelechi? 4 goals for the @NGSuperEagles in a 6-1 win against Mexico on his #U17WC debut

🦊 The last time we saw him? 3 goals for @LCFC in a 5-0 win against Sheffield United in the @premierleague