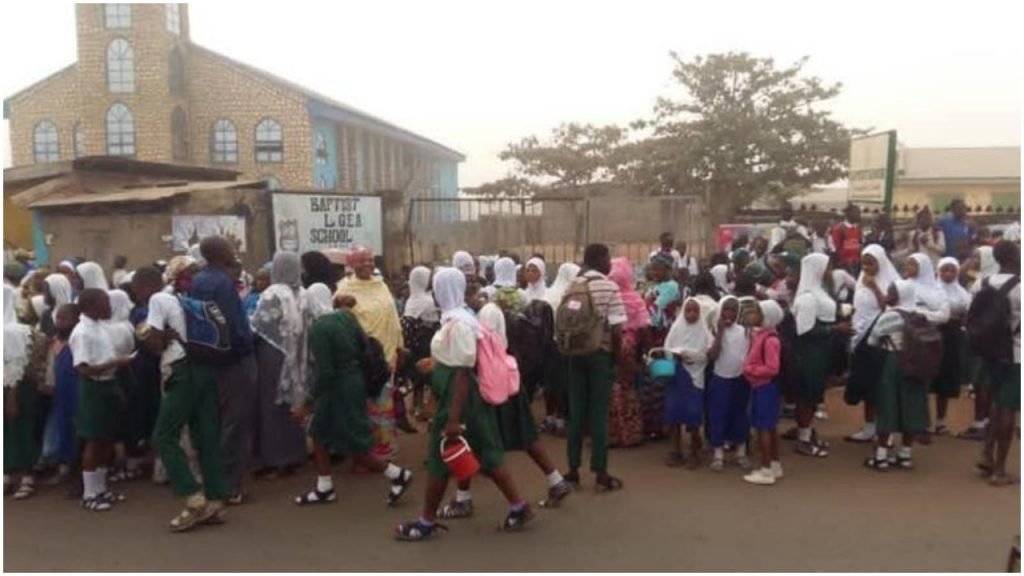 The controversy surrounding wearing of hijab in mission schools has continued as Christians in Kwara state vow to occupy the schools.

Recall that their protest against the use of hijab by Muslim girls in the ten mission schools resulted in the closing down of the schools by the State government.

A credible source within the state chapter of the Christian Association of Nigeria, CAN, who preferred not to be named, informed DAILY POST in Ilorin on Thursday, that the body will continue the action until the demands presented to the State government are realised.

“Following a meeting held by CAN, with church leaders and proprietors of the affected grant aided mission schools, held on Wednesday evening at St Barnabas church in Ilorin, to review position vis-a-vis the happenings, their resolve was to continue occupation of the ten schools today, Thursday to resist the enforcement of the use of hijab,” the source disclosed.

Recall that a bloody clash erupted on Wednesday at the Surulere Baptist School in Ilorin, as the ten mission schools closed down by the state government over hijab controversy, were directed to resume classes.

Christian faithful and staff of the school stopped Muslim girls in hijab dress code from entering the school leading to a violent clash between Muslims and Christians.

Several people were injured in the clash with the Emir of Ilorin, Alhaji Ibrahim Sulu Gambari, appealing for peace and harmony among the actors involved in the matter.

He also cautioned against any religious crisis of any kind in the State.

However, the Christian community has vowed to protect their property and ensure that the mission schools were returned to their original owners, while resisting the use of hijab in their schools.

The state government, has also vowed that the hijab issue has come to stay in accordance with the dictates of the Nigerian constitution and state laws.

A statement by the Secretary to the state government, Professor Mamman Saba Jibril, said while reacting to Wednesday’s development that “the state government took control of the schools in 1974 and has managed their affairs, which include funding and staffing.”

He declared that arguments that the schools still belong to either Muslim or Christian missionaries have been flatly rejected in court.

The statement was titled ‘Correcting misconceptions about missionary schools and hijab in Kwara state’.

The take over of the schools, Professor Jibril argued, was backed by various state laws, especially the Kwara State Education Law of 1996 (CAP E1 of the laws of Kwara state).

“These laws are very clear about the status of these schools and the rules guiding them.

“Such rules include pluralism in the recruitment of students and teachers. These schools, being public owned, are to adhere to policies of the government,” he added.