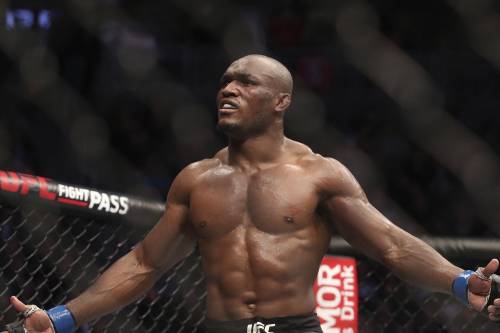 Kamaru Usman, the Nigerian mixed martial arts champion, has revealed that he and his family had nothing while in Nigeria before moving on to greener pastures and finding his beloved sport.

The UFC’s current welterweight champion disclosed this and many more in a wide-ranging interview on a Channels TV program, Gist Nigeria.

The 33-year-old father of one disclosed how he farmed and hawked to secure the next meal.

“We grew up in the village. We farmed. As a small farm boy, I used to hawk Akpu and put hot Akpu on my head. I came from nothing,” Usman started.

The Auchi-born fighter, who moved to the USA aged eight, disclosed the everyday family struggle and how his mother catered for himself and two other brothers.

“We owned a small store where we sold clothes, shoes, my mum sold bags, anything that we could sell, my mum was able to get and try to sell. My mum was a hustler and that is one of the things I respect so much about her as a woman with three rowdy Naija boys.”

The three-time defending champion, whose father went to prison while he was still in college, further revealed the father-daughter bond he enjoys with his five-year-old daughter, Samirah, who was once his gym partner.

“I think I have to accept that and honestly I don’t think I want her for this sport anyway. She’s got her thing; she’s doing gymnastics and for self-defence. She does Jiu-Jitsu because she has to learn how to control the situation if anything happens. I’m okay with those right now.”

The famed Nigerian nightmare also revealed he plans to fully move into commentary and analysis of mixed martial arts after retirement.

Usman, who will again defend his belt in a rematch with Jorge Masvidal on April 24 in Jacksonville, Florida, also listed some Nigerian cuisines he still tries to taste once in a while, and one stands out.

“Pounded yam and Egusi, there is nothing like it!”

“Mayorkun Is Bigger Than Myself, Burna Boy And Wizkid” — Davido...

African Pastor Killed His Wife In Us After Visiting A Shrine...

Oh No! Woman Murdered While Meeting Man She Wanted to Buy...