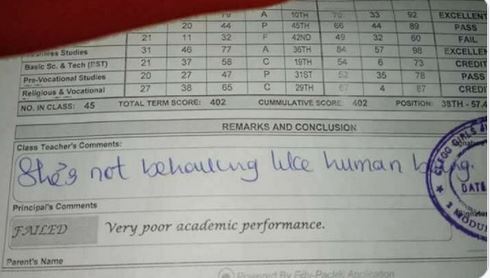 The report sheet of a student has sparked outrage online as the class teacher left a shocking comment.

On the sheet of the female student who appears to have performed very poorly, the teacher blatantly wrote ”She’s not behaving like human being”

This is so wrong 😭😭😭😭 pic.twitter.com/ZnEE0OjwYr

The comment on the report sheet has however sparked outrage on Twitter after a Nigerian man posted the snapshot of the page on his Timeline.

“For a student with such performance 2 A’s, 2C’, 2P’s and 1F and the teacher deemed it fit to say she doesn’t behave like human being? That teacher is a disgrace to teaching profession. Even with the teacher’s comment it shows the girl is brighter than her teacher. Period

** I’m curious to know what she behaves like. Does she growl and bite students at random, swing from tree to tree or she stands still like a baobab tree? Does she act like a plasmodium or she just dey corner like igneous rock?

*** I believe this is a joke and not real cos no well trained teacher would try this rubbish. The so called teacher’s sentence isn’t even grammatically correct and he/she has the guts to say a child doesn’t behave like a human being. Nansense and konkobility.

*** That means the child and the teacher are of same specie …For her to know the child doesn’t behave like a human, that means she “the teacher” also have the traces.”

Startling Tale Of 11-Year-Old Boy Who Fell And Died Inside A...

FG Speaks On Imposing Total Lockdown From Next Week