According to the reports, the passengers asked for an offline ride, then slit the throat of the driver and took his car.

A man took to Twitter to allege that an Uber driver was killed by passengers who requested a ride in Ibeju community of Lagos state.

@Josh_IK alleged that these passengers ordered a ride, cancelled it and then asked for an offline ride. They then reportedly slit the driver’s throat and took his car.

Uber Support which has now reacted to the claim, is now seeking for more information on the incident. 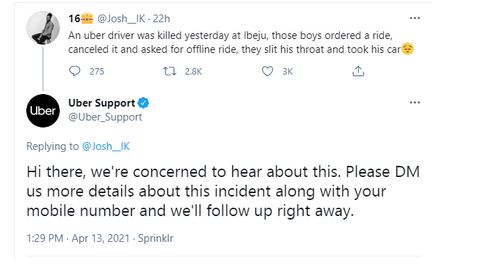 Meet the Pharmacy Graduate Who Bagged 1st Class From University of...

Horror! How An Aged Roadside Trader Was Crushed To Death In...