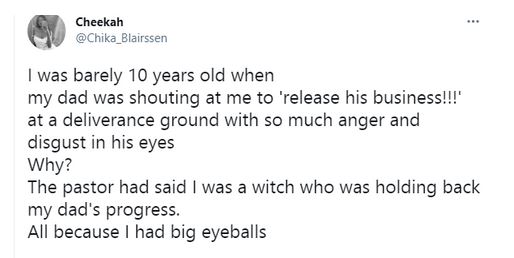 A Nigerian lady took to Twitter to recount how she was treated by her parents after she was labelled a witch by a Pastor at 10-years-old.

According to @Chika_Blairseen, the Pastor accused her of holding back her father’s progress all because she had big eyeballs.

She disclosed that her mother was the one who took her father to the church. She said he kept shouting at her to “release his business”.

“I was barely 10 years old when my dad was shouting at me to ‘release his business!!!’ at a deliverance ground with so much anger and disgust in his eyes Why? The pastor had said I was a witch who was holding back my dad’s progress. All because I had big eyeballs

Incase you’re wondering where my mum was when it was happening and why didn’t she defend me. Who do you think took my dad to the church??”

“Gowon Is The Worst Of Them All” – Aisha Yesufu Slams...