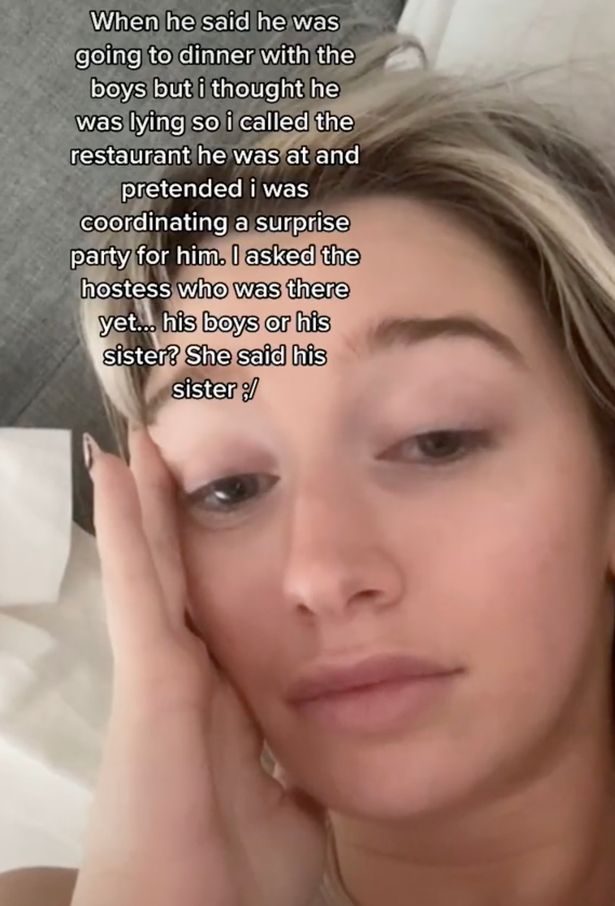 In what will come across as a really startling development, a woman has found out her boyfriend is cheating in an unusual way.

She went viral after revealing how she caught her boyfriend “cheating” with someone else in a restaurant.

Felicia Burzotta enlisted a waitress’ help when she became suspicious that her then-boyfriend was out for dinner with a woman while she was visiting her parents in New York, US.

In the widely shared TikTok video seen more than 4.6 million times, she explained how she told that he was going to dinner with a group of male friends but had a gut feeling that he was lying.

“So I called the restaurant he was at and I pretended I was coordinating a surprise party for him,” she wrote in the caption.

“I asked the hostess who was there yet…his boys or his sister? She said his sister.”

Felicia told viewers that she had a “hunch” that her boyfriend was up to something when she noticed a “blonde” female friend always showed up.

Having chatted with her boyfriend earlier in the day, she explained: “I described what my boyfriend was wearing and she [the waitress] said ‘oh yeah I see him, he is with his sister’.

“Then I asked if he is with a brunette sister or a blonde sister. Mind you, I’m looking for a blonde b****.

“She confirmed it’s the blonde one. Yeah…so that’s how I found out.”

The woman claimed she found a fake eyelash in his bed the day after too. She broke up with him after the incident and has been single since.

Viewers said Felicia did a “smart” move to find out the truth and some agreed with her intuition.

One commented: “You are so smart for doing this though, I think you’re brilliant.”

“You did not lose your mind, you used it!” a second added and a third wrote: “It’s always the girl who’s around and doesn’t make you feel comfortable, but they still be saying you’re crazy.”

Check Out Toke Makinwa’s Epic Response To A Follower Who Said...

EFCC Arrest Suspect On FBI List For Allegedly Defrauding Over 70...