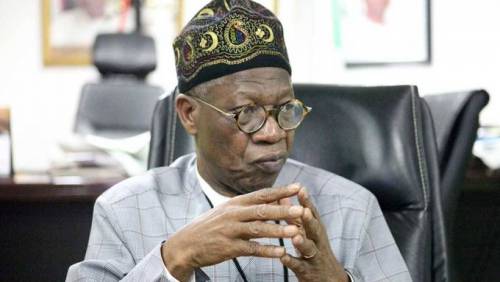 According to SaharaReporters,. the Federal High Court in Lagos State has fixed July 13 to hear the case filed by a Lagos-based lawyer and human rights activist, Inibehe Effiong, to challenge the imposition of N5 million fine on Nigeria Info 99.3FM and the threat by the National Broadcasting Commission to punish other broadcast stations over alleged hate speech.

SaharaReporters obtained the hearing notice on Thursday which shows that the case is before Justice A. L. Allagoa, and also involves the Minister of Information and Culture, Alhaji Lai Mohammed, being the supervisory minister over the NBC.

“Femi Falana, a Senior Advocate of Nigeria will be leading over 20 other lawyers to appear for me,” Effiong told SaharaReporters on Thursday.

SaharaReporters had in August 2020 reported that joined as respondents in the case marked Suit No. FHC/L/CS/1088/2020 filed at the Federal High Court in Lagos on Monday, 17th August 2020 are; the NBC, the Minister of Information and Culture, Mohammed, and the Federal Government of Nigeria.

Effiong had asked the court to determine “Whether the imposition of a sentence of fine and other penalties on broadcast stations and broadcasters in Nigeria by the National Broadcasting Commission for alleged contravention of the Nigeria Broadcasting Code without a trial and conviction by a court of law is not unconstitutional, illegal, arbitrary and a flagrant breach of the right to fair hearing as guaranteed by Section 36 of the Constitution of the Federal Republic of Nigeria, 1999 (as amended) and Article 7 of the African Charter on Human and Peoples Rights (Ratification and Enforcement) Act Cap. A9 Laws of the Federation of Nigeria, 2004.”

The lawyer also wants the court to determine “Whether the imposition of a sentence of fine and other penalties on broadcast stations and broadcasters by the 1st Respondent during radio and television programmes for critical comments made by citizens about the government and public office holders considered by the Respondents to be “abusive”, “insulting” and/or “hate speech” is not a breach of the right to freedom of expression given that the said expressions are neither created nor defined as offences under any written law that is reasonably justifiable in a democratic society having regard to Section 39 of the Constitution of the Federal Republic of Nigeria, 1999 (as amended) and Article 9 of the African Charter on Human and People’s Rights (Ratification and Enforcement) Act Cap. A9 Laws of the Federation of Nigeria, 2004”.

Effiong stated in his affidavit that the NBC, with the support of the Federal Government, has continuously imposed fines on broadcast stations and broadcasters over alleged violation of the Nigeria Broadcasting Code.

He said that the NBC has threatened to continue to impose fines on broadcast stations in the country and has also barred broadcast stations, broadcasters, and citizens who are either guests or callers during radio and television programmes from making critical comments about the government and public office holders considered by the Federal Government, the Minister of Information and NBC to be “abusive”, “insulting” or “hate speech”.

Effiong further narrated how the NBC on 13th August 2020, without initiating any criminal action against Nigeria Info 99.3FM Lagos, imposed a sentence of fine in the sum of N5, 000,000.00 (Five Million Naira) on the radio station after finding the station guilty of what it described as “unprofessional conduct” over comments made by a guest of the station on Monday, 10th August 2020 during a programme called Morning Cross Fire.

Effiong told the court that the actions of the NBC, the Minister of Information, and the Federal Government have gravely affected his freedom of expression and that of broadcast stations, broadcasters, and other Nigerian citizens who also appear as guests on radio and television stations to express critical views about the government and public office holders.

Effiong argued that “abusing” or “insulting” the government cannot be criminalized in a democracy. He contended that the expression “hate speech” is not defined under any written law and cannot be invoked or penalized based on the capricious expectations of the Respondents.

He said that to do otherwise “will amount to setting fire on the Constitution” and that “those who are paid with taxpayers’ money cannot be insulated or shielded from insults and abuse by those who pay them (the citizens)”.

The activist reminded the court that “Nigeria has passed the era of colonialism and military dictatorship”. He said that Lai Mohammed, NBC, and the Federal Government were “seeking to subvert Nigeria’s constitutional democracy with the attendant liberties and foist a civilian dictatorship on the country.”

The lawyer also asked the court to nullify and set aside the penalty of fine or other penalties imposed on broadcast stations by the NBC.

Man Drives Into Lekki Supermarket, Breaks Into The Car Parked Next...

“Don’t Give Anyone A Reason To Disrespect Your Woman”- Actress Tonto...