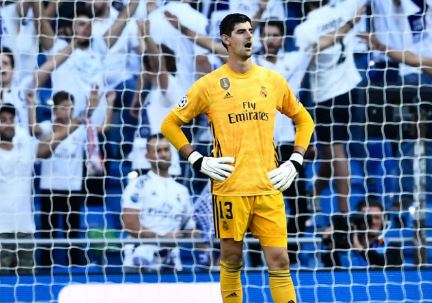 Thibaut Courtois has been left out of Real Madrid’s squad to face Granada, just a few hours after the club denied he has an anxiety problem.

The Belgian goalkeeper was substituted at half-time in Madrid’s Champions League draw with Club Brugge in midweek, with head coach Zinedine Zidane saying the player “wasn’t well and couldn’t continue.”

It was subsequently claimed in media reports that the former Chelsea man was affected by anxiety, but a club statement denied this on Friday, instead revealing he is suffering from gastroenteritis.

“In relation to certain information about our player, Thibaut Courtois, Real Madrid want to state the following,” said the statement.

“Our player has never been diagnosed with anxiety and that information is absolutely false.

“Courtois has been diagnosed and treated for gastroenteritis with dehydration and electrolyte imbalance, which made it impossible for him to finish Tuesday’s game against Brugge.

“The player is responding well to the treatment.”

As such, Courtois was not named in the Madrid squad to face La Liga surprise package Granada when Zidane announced his 19-man squad later the same day.

Alphonse Areola, who replaced Courtois against Brugge, will be joined by Castilla goalkeepers Javier Belman and Diego Altube in the group.

Lucas Vazquez and Vinicius Junior both featured in the European clash but were left out of this selection, with James Rodriguez, Gareth Bale and Rodrygo Goes returning.

Zidane had already confirmed Madrid were considering starting Eder Militao at left-back due to a number of defensive injuries, with Marcelo, Ferland Mendy and Nacho all out. Alvaro Odriozola is another option.

Real sit top of La Liga with opponents Granada in second. City rivals Atletico are just a point behind, and Barcelona just two points adrift despite their uncertain start.

No team have convinced in the league so far, but Zidane’s side have the chance to make a statement this weekend, even without their first-choice goalkeeper.

Wendy Williams flaunts massive cleavage as she steps out in V-neck...