A large earthquake jolted eastern Europe this morning with reports of shaking felt from Albania to Macedonia.

The epicenter of the tremor, which had a preliminary magnitude of 6.4, was north of Durres, a coastal town around 20 west of Albania’s capital Tirana.

Residents rushed from buildings, some holding babies in their arms, witnesses said.

The US Geological Survey said a quake of that size had the potential to cause widespread damage and casualties. Reports on Twitter from western Albania showed several buildings severely damaged. 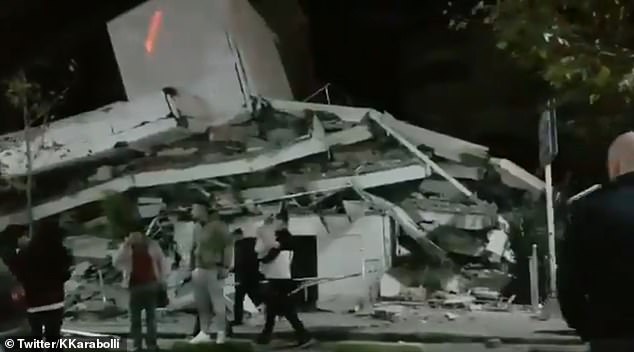 A map showing the location of the earthquake north of Durres, on the west coast of Albania

Many reports of shaking came from the Macedonian capital Skopje, 100 miles north east of the epicenter. One local, Eva Ellereit, tweeted: ‘Nothing like waking up to your entire bedroom shaking in the middle of the night #earthquake.’

Reports of violent shaking came from across the region, including the capital cities of Tirana in Albania and Skopje in Macedonia

In September a 5.6-magnitude quake in almost the same spot injured at least 70 people and damaged around 500 buildings. If the magnitude is confirmed at 6.4, today’s would be around 16 times stronger, experts said.

Computer predictions from the USGS said around 8,000 people would have felt ‘severe’ shaking in today’s quake, and a total of almost 12 million would have felt it in countries including Greece, Montenegro, Kosovo and North Macedonia.

An aftershock of around 5.4-magnitude shook the area minutes after the main tremor.