By Milly Vincent For Mailonline

A convicted fraudster serving a 24-year sentence for an internet scam is believed to have struck again, using internet access from his maximum security cell in Nigeria.

Hope Olusegun Aroke is currently under investigation in Nigeria after officials said he masterminded a ‘mega scam’ worth at least $1m (£773,000) from within the confines of the prison.

It is believed he used a ‘network of accomplices’ to carry out the fraud, reports The BBC.

Aroke, who was a Malaysian-based student at the time of his first crime, was imprisoned at the Kirikiri Maximum Security Prison in Lagos, Nigeria, serving a 24-year-sentence for an internet fraud in 2012. 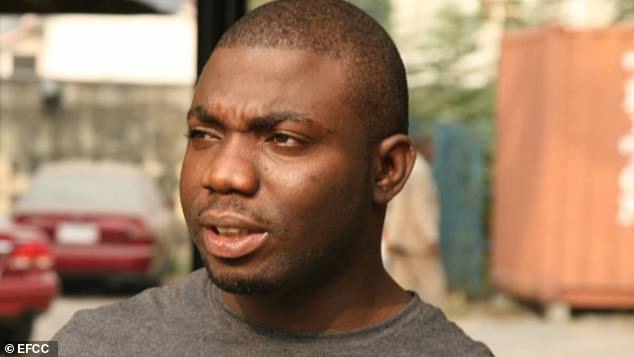 Despite his conviction anti-corruption officials investigating the new offence said they had found he still had access to the internet against ‘standard practice’.

He was also admitted to the Nigeria Police Hospital in Lagos with an ‘undisclosed ailment’. 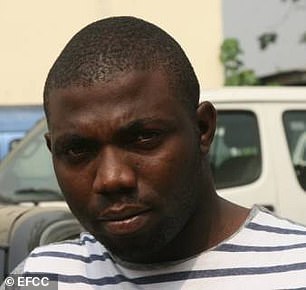 From there he had been allowed to leave custody, meeting with his wife and children, staying in a hotel and attending social events.

Nigeria’s Economic and Financial Crimes Commission (EFCC) said in a statement yesterday: ‘Preliminary investigation revealed that the convict, against established standard practice, had access to internet and mobile phone in the correctional centre where he is supposed to be serving his jail term.

‘The circumstance of his admission into the hospital and those who aided his movement from the hospital to hotels and other social engagements is already being investigated.’

Using a fake name, Akinwunmi Sorinmade, the fraudster opened two bank accounts which he used to buy a luxury car and homes while in prison, said the commission. 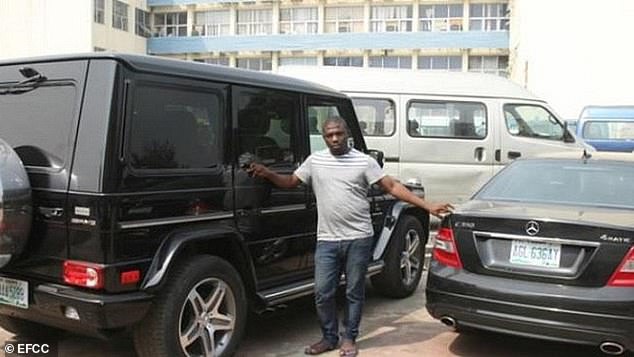 Adding: ‘[Aroke was] in possession of his wife’s bank account token in prison, which he used to freely transfer funds.’

After his arrest in 2012 the commission called Aroke an ‘arrow head of an intricate web of internet fraud schemes that traverse two continents’.

Now they are attempting to uncover how he ‘continued to ply his ignoble trade’ seven years on.

The Nigerian Correctional Service who run the prison are yet to comment on the case.

Many Nigerians believe corrupt police officials must be to blame for allowing Aroke’s illegal activities to continue – prison guards are poorly paid and could be vulnerable to bribes from wealthy fraudsters, reports The BBC.