Priti Patel admitted today that the Government’s plans for a hardline immigration policy would have prevented her own parents from settling in the UK.

The Home Secretary this morning published plans for an ‘Australian-style’ points-based immigration system as she said net migration will fall when it is introduced next year.

But the 47-year-old, who was born in London to Ugandan Asian parents of Gujarati descent, admitted they would not have made the cut were the system in place in the 1960s, in a frank radio interview.

LBC presenter Nick Ferrari, who is of Italian heritage, said to her: ‘The side of my family on my father’s side were in catering, so I don’t know if I would actually be in this country under these rules. Would you, with your parents?’

She replied: ‘This isn’t about my background or my parents.’

He pressed her again, highlighting her family background – her parents came to the UK in the 60s and set up a newsagent chain – saying: ‘But you wouldn’t be here, Home Secretary.’

At that point, she said: ‘Yeah, but also let’s not forget we are not changing our approach to refugees and asylum seekers, which is very different to a points-based system for employment and that particular route.’ 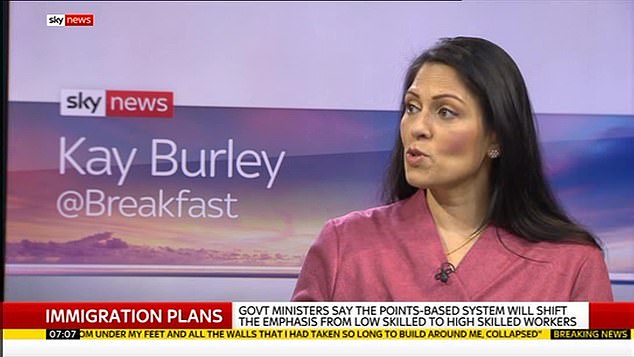 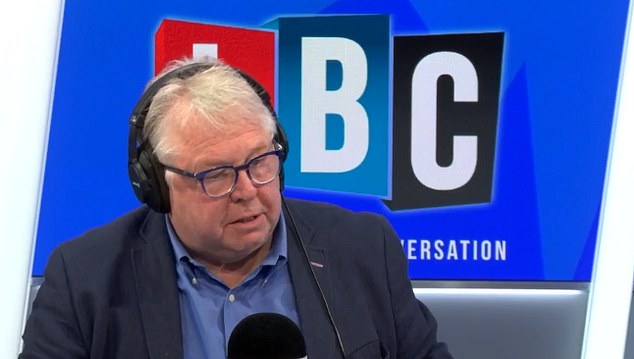 LBC presenter Nick Ferrari, who is of Italian descent, said to her: ‘The side of my family on my father’s side were in catering, so I don’t know if I would actually be in this country under these rules. Would you, with your parents?’ 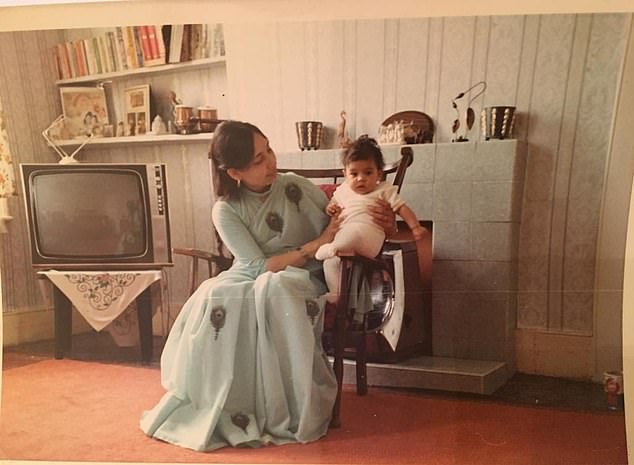 Priti Patel is pictured as a baby with her mother Anjana, who along with her father Sushil initially lodged in one small room in North London while he completed his studies in engineering

Ms Patel has previously said her parents ‘were kicked out of Uganda’ and ‘came to the UK with nothing, worked hard and set up a successful shop business’.

Who is Priti Patel, the Home Secretary who made a shock return to the government after Boris Johnson won power?

Priti Patel was brought back in to the heart of Government by Boris Johnson last July, less than two years after quitting the Cabinet in disgrace.

The daughter of Gujarati Ugandan Asians, she picked up her Tory values and work ethic from her parents.

The right-winger and vocal Brexiteer’s maternal family was originally from Gujarat in India, before moving to Uganda in the early 20th century and prospered in business.

They moved to the UK in the 1960s, before the East African nation’s 80,000 Asian community was were expelled by the murderous dictator Idi Amin in 1972.

Her parents, Sushil and Anjana, initially lodged in one small room in North London while he completed his studies in engineering.

Eventually, they were able to buy a small house in Harrow and used that to secure a bank loan for their first shop, a newsagent in Tottenham.

Priti and her younger sister and brother were frequently called upon to work alongside their parents in the several shops and sub-post offices they ran in Nottingham, Ipswich and Norwich.

When Priti became secondary school age, the family bought an upmarket chocolate shop in Hertfordshire where there were good state schools, including Watford Grammar where she was head girl.

She later got a degree in economics, sociology and social anthropology at Keele University and a post-graduate diploma in government and politics at Essex.

But they came to the UK in the 1960s and she was born in London in the same year that dictator Idi Amin expelled Uganda’s Asian community – many of whom settled in Britain as refugees.

Earlier today she dismissed business concerns that the government’s new immigration system could lead to staff shortages as she told British companies to focus on employing British workers.

The Home Secretary today published plans for the UK’s new Australian-style points-based immigration system as she said net migration will fall when it is introduced next year.

However, Ms Patel refused to set a target as she said she was not ‘getting into the sphere of targets at all’.

A crackdown on the number of low-skilled workers coming to the UK is at the heart of the new border control blueprint.

Business groups are concerned that could make it difficult to fill jobs in certain sectors.

But Ms Patel said it was ‘about time’ UK companies focused on investing in domestic workers as she claimed there is a pool of some eight million economically inactive people who could be recruited.

The government’s proposals for the UK’s post-Brexit immigration system will mean migrants from the EU will have to speak English and have a job offer to be allowed in as part of a concerted effort to end Britain’s reliance on cheap European labour.

The measures are part of the biggest shake-up to border rules since Britain joined the Common Market in 1973.

The plans will make low-skilled immigration almost impossible as EU free movement is consigned to history.

Instead, EU migrants’ chances of getting a work visa will be the same as for applicants from elsewhere.

They will need at least 70 points to work in Britain, with points awarded for speaking English, if the job earns a salary above £25,600 and if it is at a certain skill level.

Highly skilled workers – such as scientists – will be able to come without a job offer as the Government re-aligns the immigration system to the ‘brightest and the best’. But there will be no general visas for low-skilled migrants.

Responding to business concerns about what the proposals could mean for potential staff shortages, Ms Patel said: ‘It is about time that businesses started to invest in people in this country.

They will need at least 70 points to work in Britain, with points awarded for speaking English, if the job earns a salary above £25,600 and if it is at a certain skill level

‘We have over eight million people, that is 20 per cent of the work force aged between 16 and 64, that are economically inactive right now.’

Told that some of those people do not want to do certain jobs, Ms Patel said: ‘That is an assumption that has been made but it is down to businesses as well to work with the government, to join us in investing in people, levelling up across the United Kingdom so we can have wage growth across the entire country but also investment, innovation when it comes to supporting people and training them.

‘That is absolutely at the heart of the government’s agenda and of course businesses should be encouraged by that and they should be working with us to achieve that.’

The government is adamant that companies will have to wean themselves off cheap labour from the Continent.

But some industry leaders have warned the plans could spell ‘absolute disaster’ for the care system, and for farmers, builders and the hospitality sector.

Carolyn Fairbairn, director general of the Confederation of British Industry (CBI), said that while parts of the plans would be ‘welcomed by business’ the low-skilled measures would mean ‘some sectors firms will be left wondering how they will recruit the people needed to run their businesses’.

Previous Tory governments pledged to cut net migration to the tens of thousands but never got anywhere close to hitting the number.

Ms Patel today confirmed a target will not be set under the new system which will be rolled out at the end of the Brexit transition period in January 2021.

‘I am not going to get into numbers for some very good reasons,’ Ms Patel said.

‘So this is a single global immigration system. It doesn’t discriminate in terms of where you have come from or which country you originate from.

‘But importantly it is about the skills you can bring to the UK. So as a result numbers will come down, that is the purpose of having a system.’

Asked on Sky News to confirm there will not be a target, Ms Patel said: ‘We are not getting into the sphere of targets at all.’

Told that previous Tory governments had a target, the Home Secretary said: ‘I am not going to dwell over the past.’

digestng - March 28, 2020
0
Tests have confirmed eight new coronavirus infections in the country, the Nigeria Centre for Disease Control said on Saturday, raising the national total to...

digestng - March 28, 2020
0
Gombe has suspended the N30,000 minimum wage and reverted to the previous N18,000 wage, citing the effect of the coronavirus pandemic on global economy. The...

digestng - March 28, 2020
0
Miami has reported its first COVID-19 related death, amid fears it could become the next coronavirus epicenter in the United States. Israel Carreras, 40,...