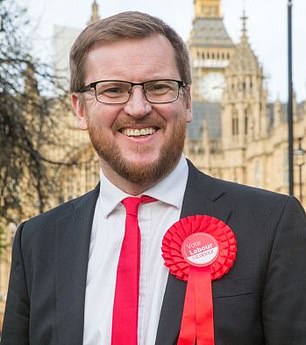 A vicar dubbed ‘Red Rev’ who was hoping to be the first sitting clergyman MP in 200 years has stood down amid a sexual harassment probe.

Steven Saxby was suspended from Labour last week as the party looks into the complaint against him.

It is understood the case has been referred to the National Constitutional Committee and he was suspended pending that process.

It means he is no longer a candidate for the key marginal seat of The Cities of London and Westminster, despite reportedly wanting to appeal and represent Labour at the next election.

The constituency’s executive committee on Monday voted to have its chair push Saxby to withdraw his candidacy, according to LabourList.

In a statement Saxby said: ‘I have been suspended from the Labour Party over a complaint I strongly refute. It is right that complaints are properly investigated.

‘I am expecting it to take some time for the disciplinary process to run its course whereby I am hoping to clear my name and return to campaigning.

‘In the meantime, with the strong likelihood of an imminent general election, it is essential that Cities of London and Westminster Labour have a parliamentary candidate in place as soon as possible.

‘It is therefore with deep regret but for the good of the local and national party that I have formally withdrawn my candidacy. 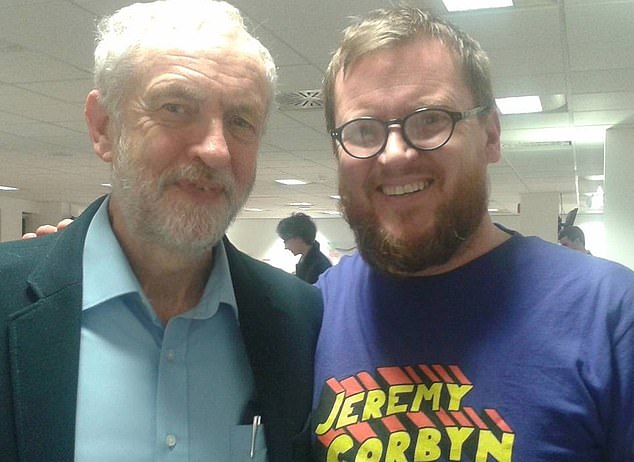 It means Saxy (pictured with Labour leader Jeremy Corbyn) is no longer a candidate for the key marginal seat of The Cities of London and Westminster, despite reportedly wanting to appeal and represent Labour at the next election

‘I want to thank everyone who has supported me over the last two years to build a campaign capable of electing a Labour MP in the heart of London.

He added: ‘I encourage everyone to get behind a new candidate and help win for the vital transformation the constituency and country need.’

The party is now expected to open applications for the seat in a bid to oust Conservative incumbent Mark Field and fend off former Labour MP Chuka Umunna, who is now a Liberal Democrat.

A Labour Party spokesman told MailOnline: ‘The Labour Party takes all complaints extremely seriously, which are investigated and any appropriate disciplinary action taken in line with the Party’s rules and procedures. We can’t comment on individual cases.’

It is not the first time Saxby has face accusations of improper behaviour.

In March the then 48-year-old apologised to his wife of 20 years after she accused him of repeated affairs – including one with a church organist.

Momentum supporter Saxby said at the time he was taking a break from campaigning and was on leave from his duties at Saint Barnabas in Walthamstow, east London, while church officials investigated the claims.

His wife Christine told friends their marriage was struggling to survive after she discovered he not only had a brief affair in October, but she suspected he had been in a secret four-year relationship with an international pianist, who was a member of their congregation and who she counted a friend.

Saxby (pictured with trans model Talulah-Eve) released a statement yesterday which said: ‘I have been suspended from the Labour Party over a complaint I strongly refute’

Mrs Saxby told friends of her ‘great pain and sadness’ at finding out about his infidelity.

The suspected ‘other woman’ was a trained pianist and conductor who came to London to study for a Masters at the Royal College of Music.

Saxby won a hotly-contested selection to become Labour’s parliamentary candidate in Cities of London and Westminster in February last year after getting support from union Unite and the endorsement of shadow chancellor John McDonnell, who described him as a ‘good socialist comrade’.

The central London seat, which includes the Houses of Parliament, was put on Labour’s target list for the next election, after Foreign Office minister Mark Field, who has been the Tory MP since 2001, saw his majority slashed from 9,671 to 3,148 in 2017.

But critics questioned Saxby’s suitability after a YouTube clip emerged showing him speaking alongside firebrand ex-MP George Galloway at a mosque in East London.

In the 2015 film, Saxby accused the Government of ‘extremism’ by bombing Syria, and claiming it was ‘stigmatising Muslim children’ with its anti-radicalisation Prevent strategy.

Labour leader Jeremy Corbyn last year appeared at a campaign rally alongside Saxby and posed with him holding a placard that said: ‘Steven’s Team’.

Saxby had been aiming for political office for years – telling a reporter in 2015 that he aimed to become the first churchman since 1801 to remain a vicar after being elected to Parliament.

There has traditionally been nervousness about clergymen exerting pressure on congregations to support a particular political party.

To that end Saxby sought to stand in a constituency away from his parish.

Hawks and John Collins will host Raptors at State Farm Arena. The Rapt

John Bercow may have to join Labour Party if he wants to be a...

digestng - January 21, 2020
0
A mansion in the Scottish landscape which was built for the son of a servant who went on to become a mining tycoon...

Hawks and John Collins will host Raptors at State Farm Arena. The Rapt