More than 250million children and teenagers will be obese by 2030, according to a damning prediction by experts.

The World Obesity Federation (WOF) calculated the risk of 191 countries ‘acquiring a major childhood obesity problem’ over the next decade.

China is expected to be the worst affected, with an estimated 61.9million obese five- to-19 year olds in just over a decade.

This is more than double the amount predicted for second-placed India, expected to have 27.4million obese children and teenagers in 2030.

The US is third with 16.9million, while the UK comes in 36th place, with an estimated 1.3million obese youngsters. 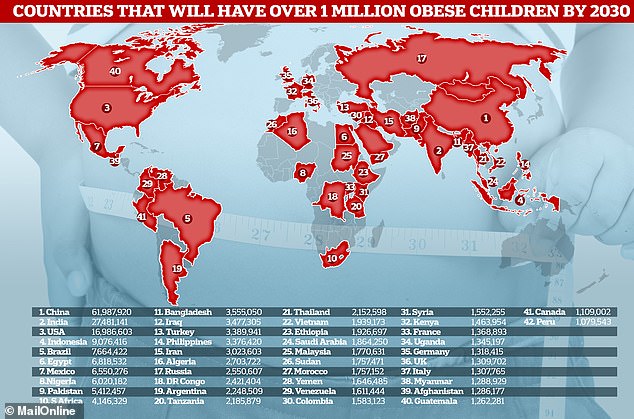 The World Obesity Federation calculated that 42 countries will have more than one million obese children by 2030. China is set to have the most at 61.9million, followed by India at 27.4million. The US comes in third at 16.9million, while the UK is 36th with 1.3million

Experts warn the pandemic will ‘overwhelm’ health services, with many countries being ‘unable to cope’ with the demand of diabetes drugs and weight-loss surgery.

The authors said: ‘The increase shows a critical failure of government to respect and protect our children’s rights to good health. We can do better, and we must.’

More than one in five children in the UK are overweight or obese when they start primary school, rising to one in three by the time they leave, NHS statistics show.

And in the US, nearly one in five (18.5 per cent) two-to-19 year olds are dangerously overweight, according to the Centers for Disease Control and Prevention.

They are also more likely to have weight problems as adults, which could shorten their life.

To uncover how the issue may affect generations to come, the WOF and NCD Risk Factor Collaboration created risk scores for 191 countries.

This was based on existing obesity statistics and known risk factors for the condition, like maternal smoking and breastfeeding rates.

In data shared with The Guardian, the team found 158million two-to-19 year olds will be obese across the world next year.

This is expected to rise to 206million in 2025 and 254million in 2030, according to the Atlas of Childhood Obesity report.

The report gives the country a zero per cent chance of hitting the World Health Organization’s target of ‘no increase in obesity prevalence by 2025’.

In the UK, 12.4 per cent of children aged five-to-nine are expected to be dangerously overweight in 11 years time, with the issue also affecting 10.3 per cent of 10-to-19 year olds.

The countries were given a 39 per cent and 17 per cent chance of hitting the 2025 target, respectively.

Just one in 10 of the countries featured were given a 50 per cent likelihood of meeting the target. And the odds of 156 of the nations were less than 10 per cent.

After China, India and the US, the top 10 is made up of Indonesia, Brazil, Egypt, Mexico, Nigeria, Pakistan and South Africa.

The authors also gave the countries a risk score of having an obesity crisis in the next decade.

Tim Lobstein, an author of the report, claims the ‘rising tide’ of obesity has not been efficiently addressed by policies that encourage healthy living and restrict junk food marketing to young people.

He likened the situation to ‘global overheating’, in the sense there is ‘resistance to intervene’ even for the greater good.

With the rising rates of obesity in young people comes an increasing need for related treatments.

He blames global manufacturers of soft drinks and processed food for fueling the problem.

Louise Baur, head of child and adolescent health at the University of Sydney, agreed, adding: ‘We were seeing the rise of convenience foods, more motorised transport, fewer kids biking and walking, the rise of sedentary pursuits and the use of screens by children’.

WHAT IS OBESITY? AND WHAT ARE ITS HEALTH RISKS?

Obesity is defined as an adult having a BMI of 30 or over.

A healthy person’s BMI – calculated by dividing weight in kg by height in metres, and the answer by the height again – is between 18.5 and 24.9.

Among children, obesity is defined as being in the 95th percentile.

Percentiles compare youngsters to others their same age.

For example, if a three-month-old is in the 40th percentile for weight, that means that 40 per cent of three-month-olds weigh the same or less than that baby.

The condition costs the NHS around £6.1billion, out of its approximate £124.7 billion budget, every year.

This is due to obesity increasing a person’s risk of a number of life-threatening conditions.

Such conditions include type 2 diabetes, which can cause kidney disease, blindness and even limb amputations.

Research suggests that at least one in six hospital beds in the UK are taken up by a diabetes patient.

Obesity also raises the risk of heart disease, which kills 315,000 people every year in the UK – making it the number one cause of death.

Carrying dangerous amounts of weight has also been linked to 12 different cancers.

This includes breast, which affects one in eight women at some point in their lives.

Among children, research suggests that 70 per cent of obese youngsters have high blood pressure or raised cholesterol, which puts them at risk of heart disease.

And if children are overweight, their obesity in adulthood is often more severe.

As many as one in five children start school in the UK being overweight or obese, which rises to one in three by the time they turn 10.

Tony Blair calls for senior minister to be put in charge...