By Tim Stickings For Mailonline

Spain’s Prime Minister has been ridiculed for mixing up two types of ham – confusing a regional delicacy with a run-of-the-mill cut.

Pedro Sanchez joked about the Chinese President being ‘served a plate of jamón serrano from Extremadura’, where the Spanish PM was visiting a livestock fair.

He meant to say jamón ibérico, a local speciality which can take up more than four years to produce.

According to ABC, the Prime Minister’s meat-based blunder was met with ‘disbelief’ among visiting producers. 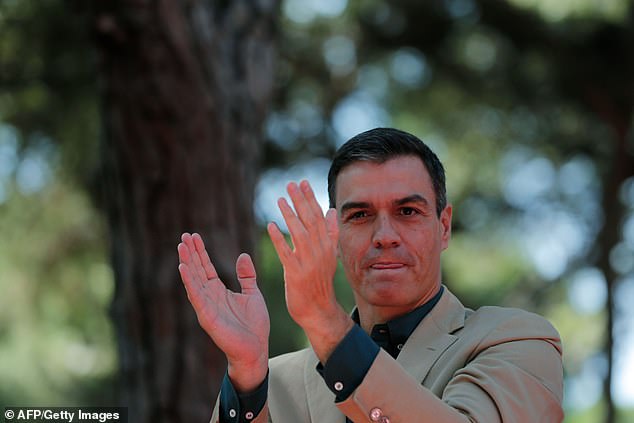 Blunder: Pedro Sanchez (pictured) has been ridiculed for mixing up two types of ham – confusing a regional delicacy with a run-of-the-mill cut

One farmers’ lobby group, Asaja Extremadura, said Sanchez had ‘made a fool of himself’ among the Extremadura locals.

The group promised to send Sanchez some slices of Iberian ham ‘so that he doesn’t get confused again’.

Carmen Riolobos, a member of the Congress of Deputies, branded Sanchez a ‘gastronomic and cultural illiterate’.

Jamón ibérico is made from free-range black Iberian pigs who are fed with acorns, and cured for up to 48 months.

The pigs must be at least 50 per cent ibérico to qualify and the ham has a protected status under EU law, restricting its production to four regions.

The dark, chewy ham has been described as the ‘star produce’ and ‘flagship’ of Spanish cuisine and can cost more than €100 per kilogram.

The cheaper jamón serrano is made from regular pigs.

After a three-week shutdown, Sudan restores internet, but only for one...