Britons are set to bask in scorching 79F (26C) temperatures tomorrow in the last three days of lockdown sun, before Arctic air brings wintry showers on Sunday and Britain goes back to work next week.

It comes ahead of Prime Minister Boris Johnson announcing a five-step plan for Britain’s ‘second phase’ of the coronavirus lockdown on Sunday, with the government set to drop its ‘Stay at Home’ message.

Today will see prolonged sunshine with tomorrow ‘very warm’ as temperatures rocket to 79F (26C). Parts of the country are forecast to be hotter than some of the Europe’s top tourist destinations, including Monaco and Corfu.

The fine spell should continue for most areas into Saturday, but many beaches and open spaces are likely to be largely empty as people stay at home due to the coronavirus lockdown. 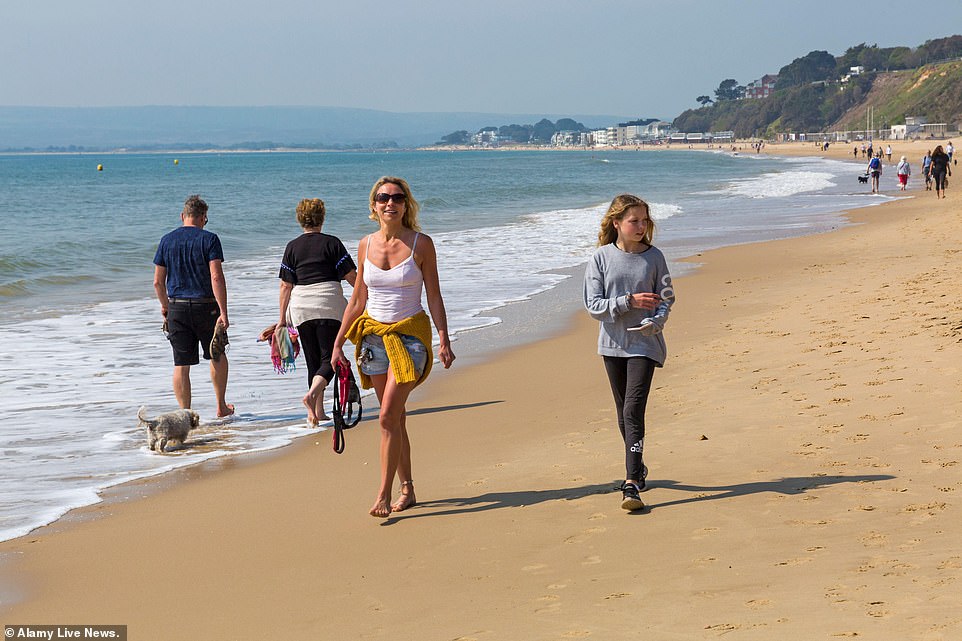 People walk along the beach in Poole, Dorset, as they take their daily permitted exercise and walk their dogs during the lockdown. Today will see prolonged sunshine with tomorrow ‘very warm’ for most as temperatures rocket to 79F (26C) 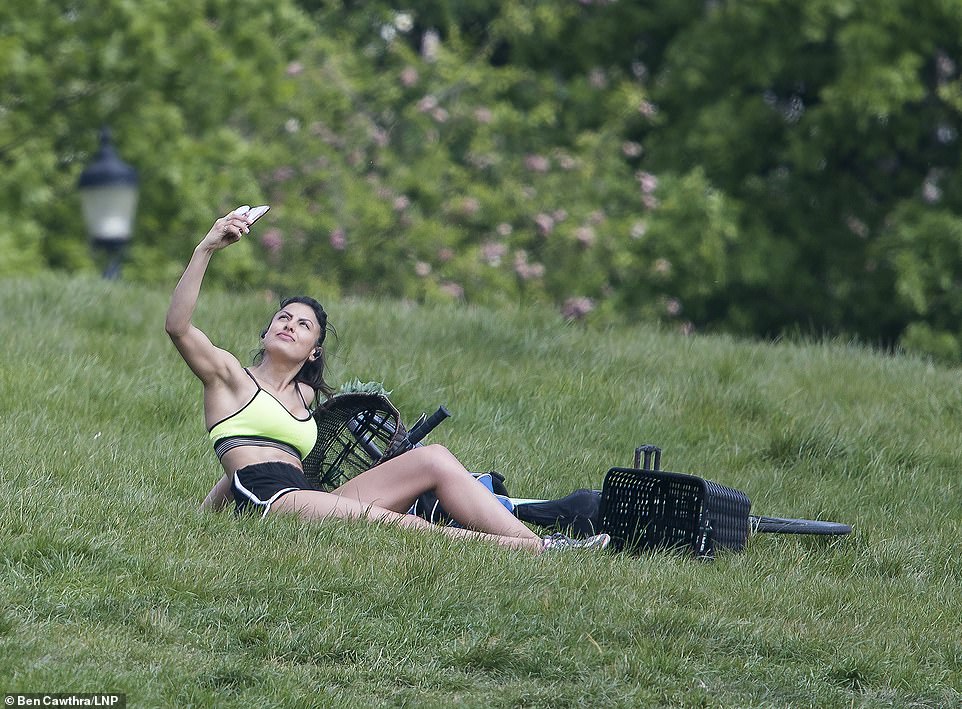 A woman takes a selfie while sitting next to her bicycle on Primrose Hill in London during the warm weather. The fine spell will continue into Saturday, but many open spaces are likely to be largely empty as people stay at home amid the lockdown 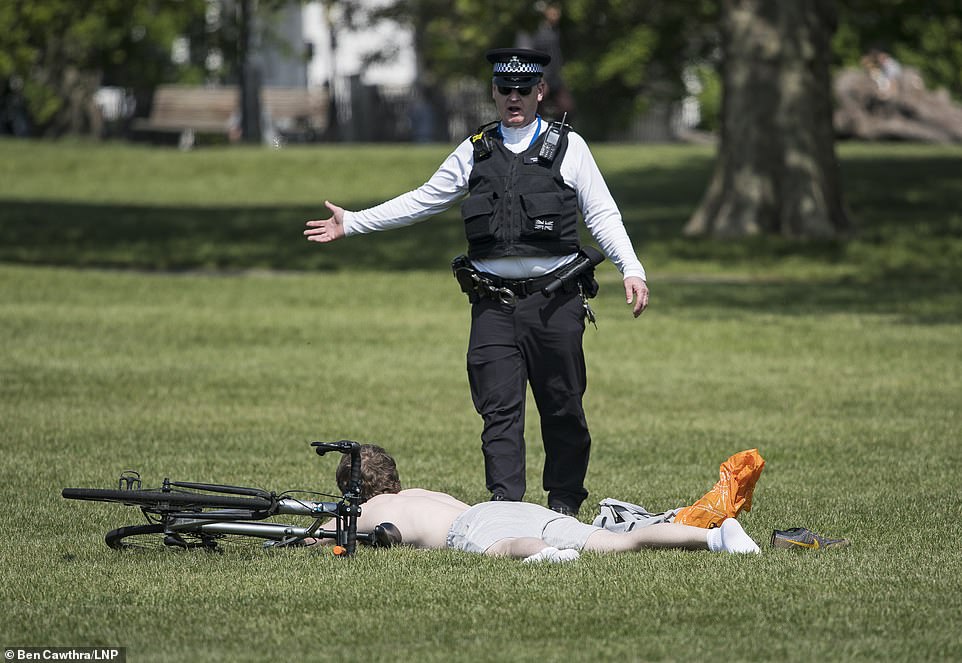 A police officer approaches a member of the public sunbathing on Primrose Hill in London during the warm weather. The Government is set to announce measures to ease lockdown rules, which were introduced to fight the spread of coronavirus 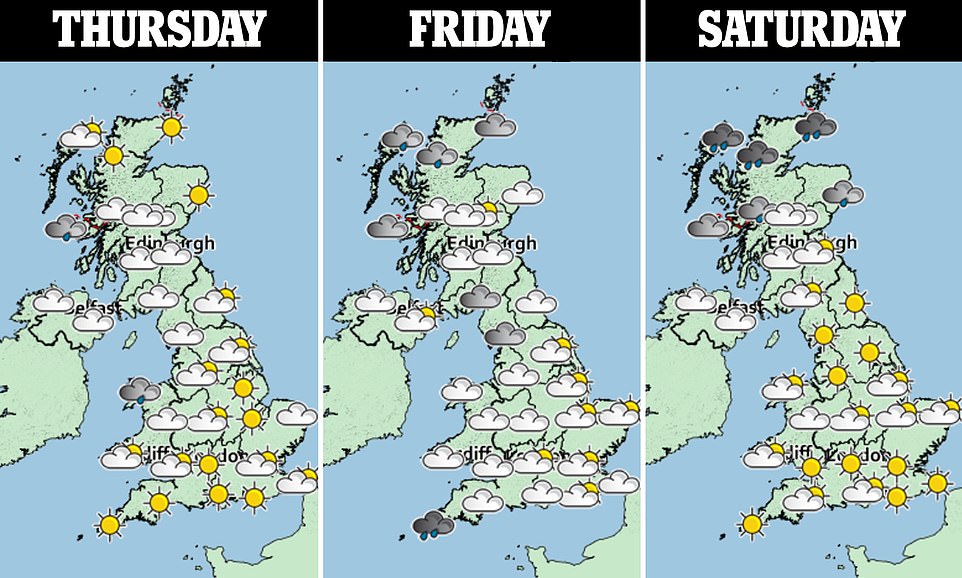 Temperatures will hit up to 73F (23C) in warm spots today, but heavy and potentially thundery showers could develop in some areas of Wales.

But the warmth will be short-lived as Arctic air blasts the nation on Sunday, bringing wintry showers in the north.

Oli Claydon from the Met Office told MailOnline: ‘We could see 26C in London tomorrow and that’s probably the highest we’re going to see. Temperatures just a notch down on Saturday, so 24C expected in south-east then a significant drop in temperatures on Sunday.

‘Quite a settled set-up with warm conditions moving in, building tomorrow and Saturday, the warmth is getting as far as France.

‘There are chances of wintry showers in the north, not widespread, in northern Scotland over the hills and potentially east coast, but nothing significant and won’t accumulate, especially on tarmac.’

He added: ‘It will be a cold start to next week, as a widespread front hits Sunday night and into Monday. Monday morning feeling really quite chilly, considering the warmth on Saturday and Sunday.

‘On Sunday air is coming straight down from the Arctic maritime, an air mass which is very cold in nature, directly from the north and Arctic. It can bring wintry showers with it as travelling over the sea so gets a bit of moisture.’ 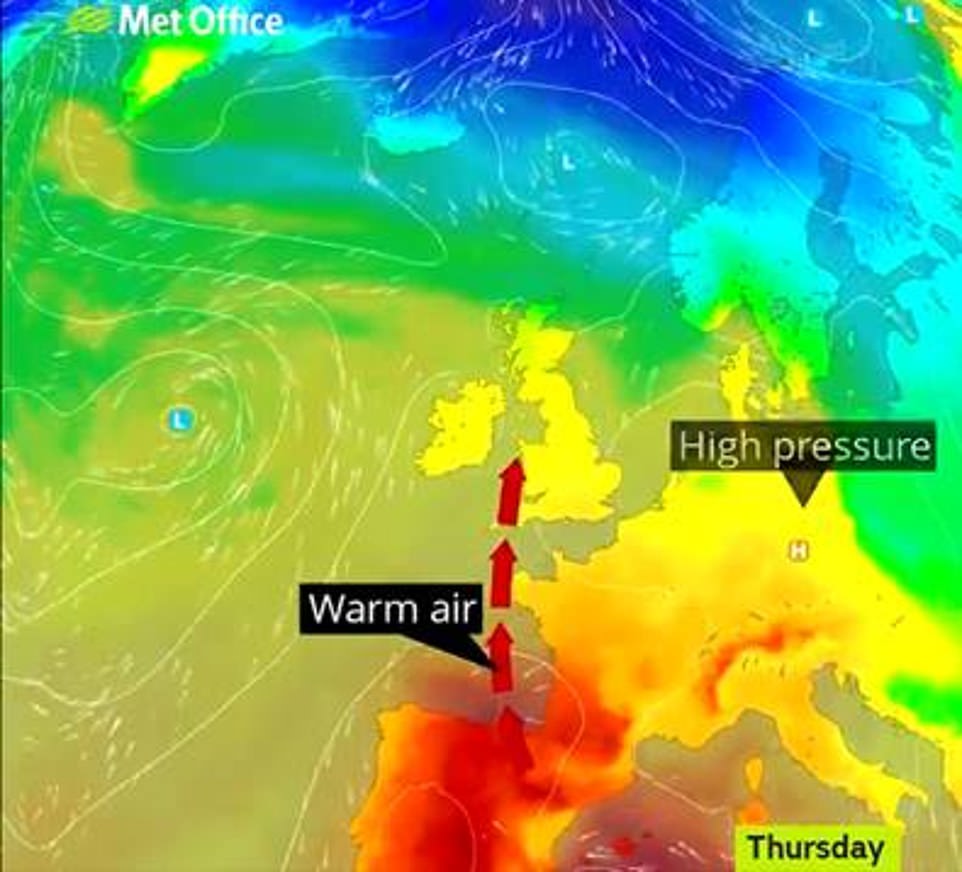 A map from the Met Office shows warm air rising from the south, reaching as far as France. Oli Claydon told MailOnline: ‘Quite a settled set-up with warm conditions moving in, building tomorrow and Saturday’ 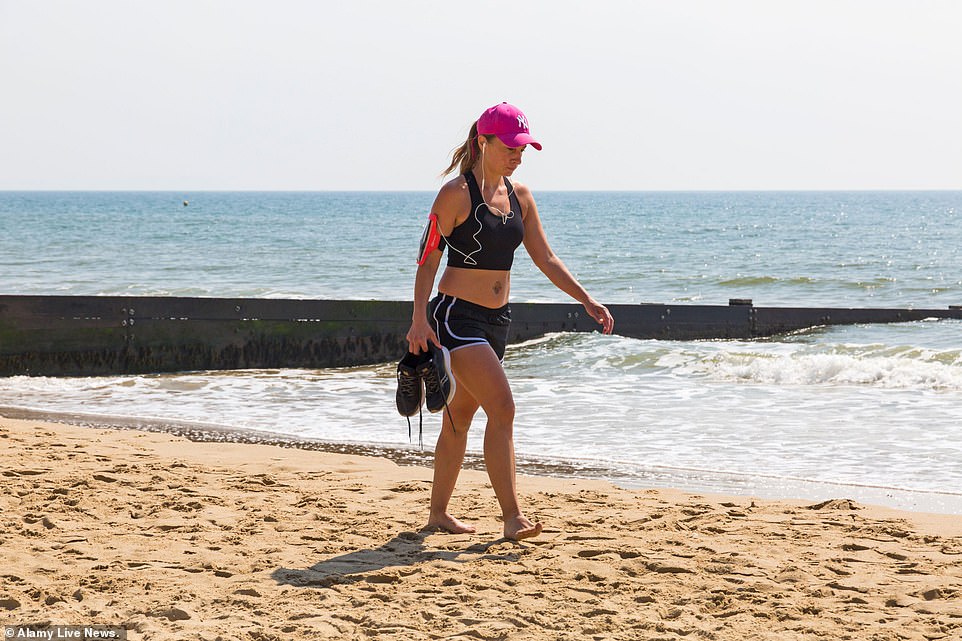 People take their permitted exercise at the beach in Poole, Dorset, with most adhering to the government’s coronavirus guidelines. Temperatures are rising across the UK today ahead of a long, warm bank holiday weekend 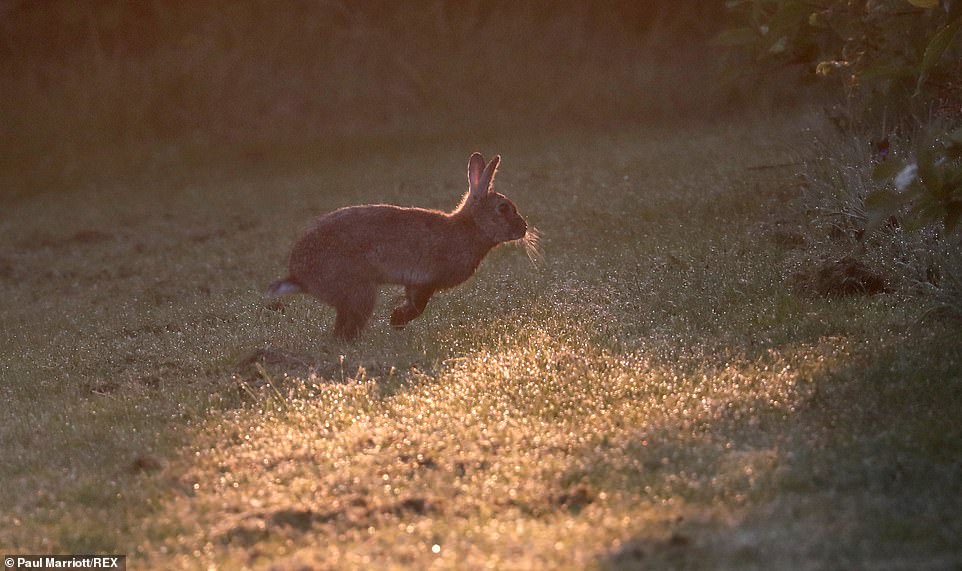 A rabbit pictured in Nene Park, Peterborough, Cambridgeshire this morning, with its whiskers caught by the sunlight. Next week will be ‘largely dry’ with cloudier skies and light rain, as drier and brighter conditions develop in middle of the week 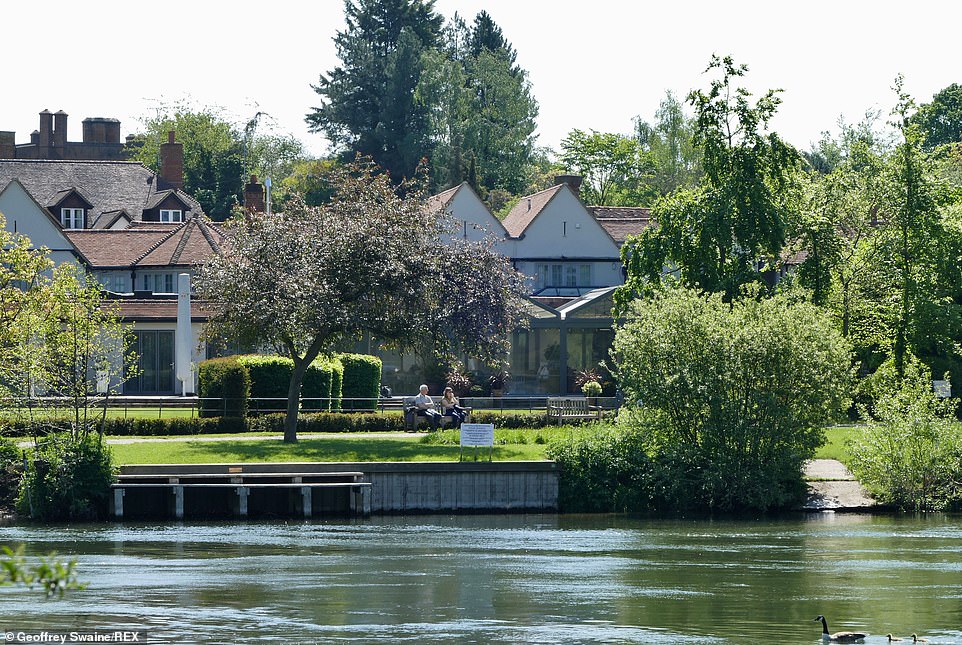 A couple sit on a bench looking out over the river in Berkshire, UK, this morning. Although today will see the mercury hitting up to 73F (23C) in warmer spots, heavy and potentially thundery showers are possible in Wales 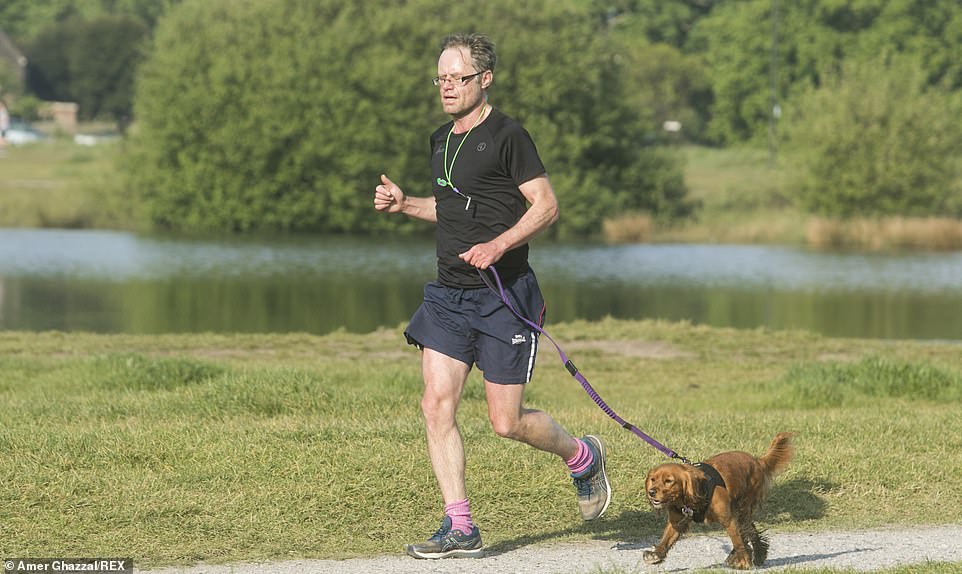 A person seen exercising as they jog and walk their pet on Wimbledon Common in London during the warm weather. The government plans to relax the lockdown restrictions from Monday, with Boris Johnson making an announcement on Sunday

BBC’s Sarah Keith-Lucas said: ‘It was a bit of a chillier start to the day earlier today but things are now warming up, and that’s going to be the theme over the next few days.

‘Those temperatures will be on the rise, quite a bit of warm, sunny weather around but also a few showers and if you do catch these showers, they could well be quite heavy and potentially thundery as well.

‘But high pressure still in charge, it’s just drifting off towards the east and that’s going to allow a couple of weather fronts to affect western parts of the UK at times today and tomorrow as well.’

She added: ‘But further east across England, Scotland and Wales too you should keep the blue sky, and temperatures in the warmer spots up to 22C or 23C, down towards the south-east typically about 17C to 20C.’

Meanwhile, bookmaker Coral has made it odds-on at 1-2 for 30C or higher being reached over the bank holiday weekend in the UK.

The firm is also offering that tomorrow could be the hottest May bank holiday on record. 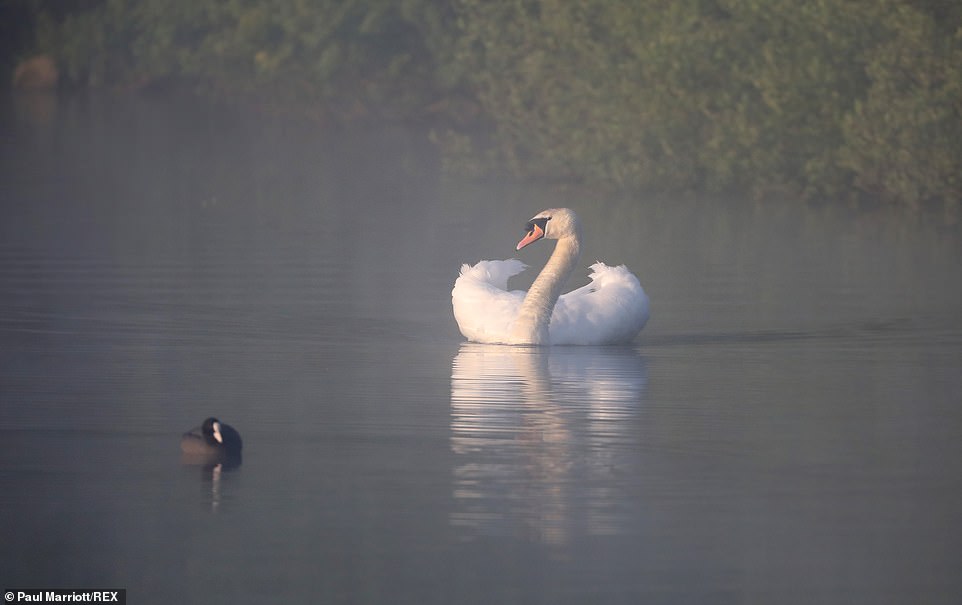 A coot and a swan sit on a misty Overton lake in Nene Park, Peterborough today. BBC’s Sarah Keith-Lucas said temperatures will be ‘on the rise’ today but warned of possible showers, which could be potentially heavy and thundery 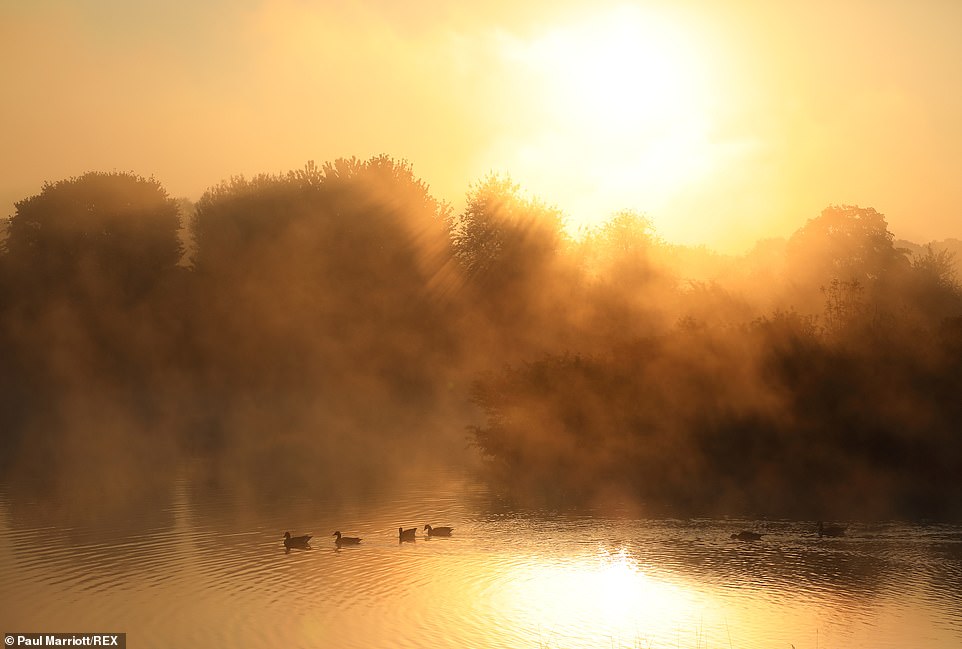 A misty start to the day at Lynch lake in Nene Park, Peterborough, Cambridgeshire. Britons are set to bask in scorching 79F (26C) temperatures tomorrow on bank holiday, in the last three days of lockdown sun 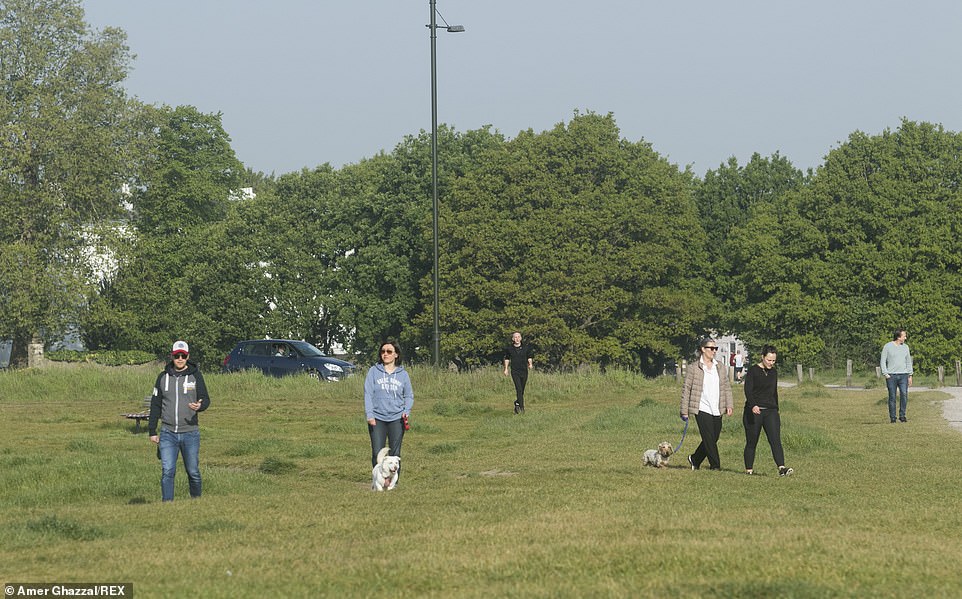 People exercise and walk their dogs on Wimbledon Common. Conditions will remain sunny on Saturday, especially for central and southern areas, but the warmth will be short-lived with a sharp change in temperatures on Sunday 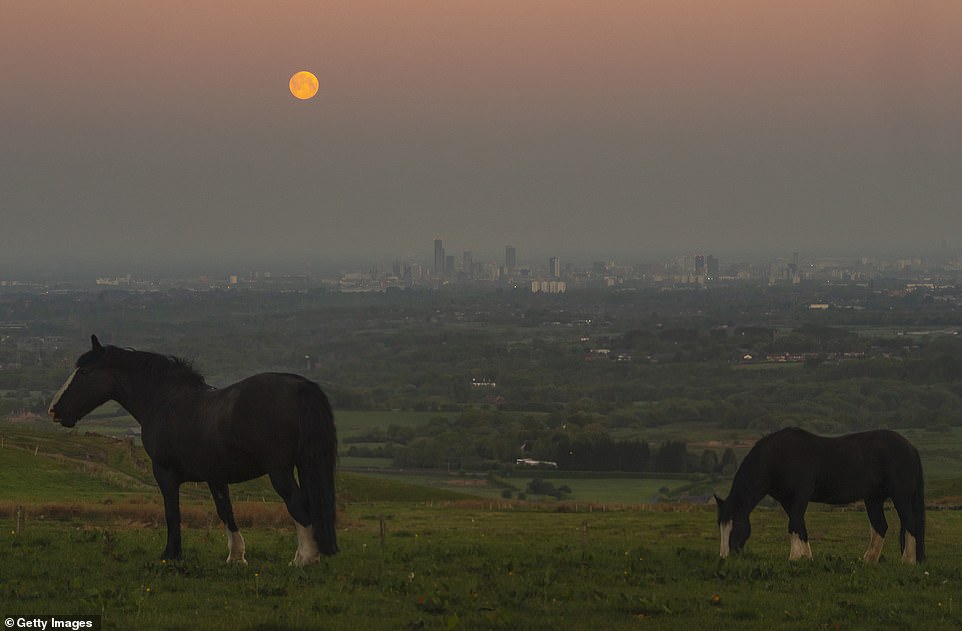 Horses graze as the fully moon, known in May as the Flower Moon, sets above Manchester city centre. The Flower Moon is this year’s last Supermoon and signifies spring and the flowers that bloom during the month of May

Coral’s John Hill said: ‘It looks like we are set for a scorching bank holiday weekend with 30C likely to be reached according our betting.’

Next week will be ‘largely dry’ with cloudier skies and patches of light rain, as drier and brighter conditions develop towards the middle of the week.

But parts of England and Wales may see showers and strong winds with a chance of frost overnight, before warmer weather possibly approaches the south towards the end of the week.

Conditions are forecast to be ‘unsettled’ towards the end of the month before hitting average temperatures for the time of year, according to the Met Office’s long-term forecast.

digestng - June 5, 2020
0
The Minister of State for Science and Technology, Mohammed Abdullahi, says lack of homegrown technology has exposed Nigeria to risks of coronavirus. The minister stated...

digestng - June 5, 2020
0
Audi’s e-tron Sportback and 2021 e-tron SUV use improved thermal management of the battery, but Audi's not making any claim about increased charging...

digestng - June 5, 2020
0
Vice President Yemi Osinbajo on Wednesday led the members of the Economic Sustainability Committee (ESC) to interact with the leadership of the National Assembly...

Are vaping scare stories just as dangerous as tobacco?

RICHARD KAY: Did Boris Johnson fall victim to the No10 ‘machismo...